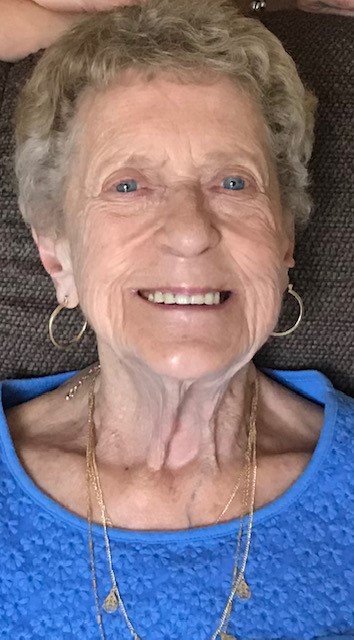 Ruth Mary Manning, 88, of Sabetha, Kansas, formerly of Morrill, Kansas, was called home by her Lord and Savior on Wednesday, December 1, 2021, at her home at the Apostolic Christian Village apartments.

Ruth was born November 12, 1933 to Alfred and Rena (Northhouse) Visser in Grand Rapids, Michigan.  Ruth graduated from Plainfield High School in 1952.  After graduation, she began working as a secretary at a large insurance company in Grand Rapids.  It was during this time that she met David “Dave” Manning who became the love of her life. They were married on September 18, 1953 and were blessed with six children.

In 1961, Ruth and Dave started the D and R House Moving business.  Dave was a full-time house mover while Ruth served as the businesses secretary.  Their business would later take them to Wabash, Indiana where they would become active members of the College Corner First Brethren Church.  During this time, they felt the call from God to go into ministry.  So, they sold their moving business and started their first ministry in Udell, Iowa at the First Brethren Church.  While serving in this ministry for four years, Ruth was the church secretary, pianist, and started driving a school bus, while at the same time being a busy mom to six children and their friends.

Next, their ministry took them further west, and they would spend the next two years in Falls City, Nebraska and Morrill, Kansas.  At the same time, she continued to be a school bus driver, drove daily bus routes, and buses to various school activities for the Falls City School district.  Then, their ministry took them to Morrill, Kansas on a full-time basis for the next eight years.  Ruth remained busy in the church and also, drove a school bus for the Sabetha Unified School district.  She was known for being a “mom” to many children that she met through her own children, the church, and various school activities which earned her the nickname “Momma Ruth.”  Her door was always open to visitors and she was known for cooking large meals to accommodate the extra guests who stopped by for a wonderful meal and visit.  In 1986, their ministry called them to Friedensburg Bible Church in Avon, South Dakota. During this time, she made many new friends and served the community by delivering Meals on Wheels to people in need.  She enjoyed having her grandchildren come to South Dakota for extended visits throughout the year.

In 1996, Ruth and Dave retired and returned to Morrill, Kansas.  During retirement, she enjoyed spending time with her family and especially enjoyed attending her grandchildren’s sporting events and school activities.  Also, she and Dave enjoyed camping and they spent several winters camping in Alamo, Texas.

Funeral service will be held on Tuesday, December 7, 2021 at 11:00 a.m. at the NorthRidge Church in Sabetha.  Visitation will be on Monday, December 6, 2021 from 6:00 p.m. to 8:00 p.m. at the Popkess Mortuary in Sabetha, Kansas.  A second visitation will be held on Tuesday, December 7, 2021 from 10:00 a.m. until service time at the NorthRidge Church.   Memorial contributions may be made to the Outstretched Arms Ministries and the Gideon’s International sent in care of the Popkess Mortuary, 823 Virginia, Sabetha, Kansas  66534.  Online condolences may be left for the family at www.popkessmortuaires.com.