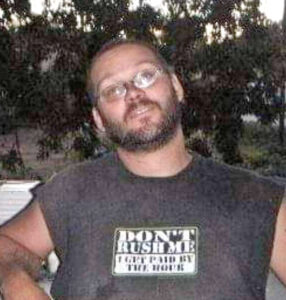 Everett was born in Nebraska City, NE, on October 28, 1978, to Glenn A. Bice and Jane (Avis) Bice. Everett went to school at Rock Port High School in Rock Port, MO.

Everett married Michelle Craig on July 3, 2000, and in the marriage, they had one child, Raymond, and he had two step-children, Kevin and Kari. They later divorced in February 2020.

Everett enjoyed working on cars, playing his guitars and spending time with his friends and family. He worked for Roofers Inc. in Nebraska City for several years. He also worked for Salem Grain of Salem, Falls City and Dawson.

He is survived by his son, Raymond of Falls City; ex-wife, Michelle, of Falls City; stepson Kevin (Mary) Craig, of Colorado; stepdaughter, Kari Craig (Richard) of Verdon, NE; mother, Jane Avis, of Tucson, Arizona; sister, Amanda (Bobby) Pittman, of Cedar Falls, IA; two nieces, Cassie and Jade of IA; eight grandchildren; his girlfriend Sara Ellis of Auburn, NE and so many friends and loved ones left to mourn his passing.

Everett was preceded in death by his father, Glenn A. Bice of Auburn and grandfather, Roy Avis, of Tucson, Arizona.

Cremation was done at the Kremer Funeral Home of Omaha.

No viewing or services will be held.