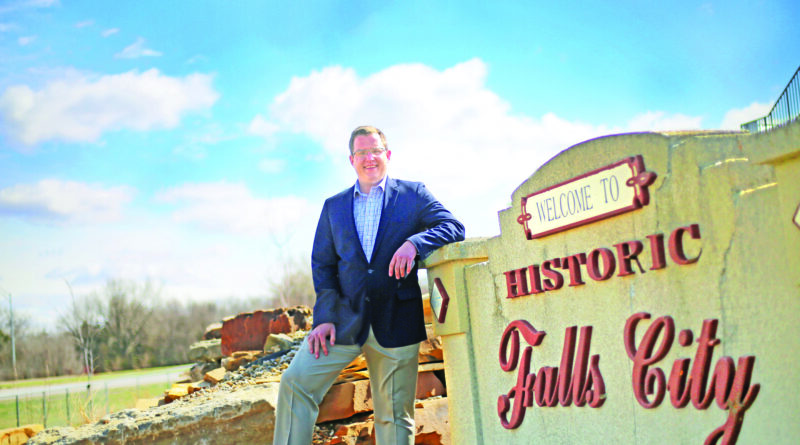 Cromer announced her resignation in January after 13 years at the helm.

Froeschl has been an ambassador for Falls City since returning “home” in 2010. Once settled back in his old stomping grounds he hit the ground running staying active in the Elks Club, serving as a board member of the Falter Park Committee, raising money through donations and grants for the recreation of the Nemaha Falls display as you enter town, serving on City Council, spearheading the effort to purchase the new fire truck for the FCFD and is working on grants for air packs and the list goes on and on.

“There’s an innate passion I have for Falls City,” said Froeschl. “It’s the town that both sets of my grandparents thought would be a good place to raise their children. All of my family is here.”

Working toward building a better Falls City is part of his mom’s legacy. Froeschl’s Grandpa Bud Kiefer’s step-father, Tom Clark was the Water and Light Superintendent years ago.

Froeschl, a 2002 Falls City Sacred Heart graduate, left Falls City for college at Nebraska-Kearney, returning a few summers to work for Gary Richey at the Street Department. While studying Communication Journalism, Froeschl’s ultimate goal was ESPN. Working for Channel 8 in Lincoln, shooting Husker Highlights, volleyball and high school football highlights to build his resume and gain some job experience, he found himself ready to find a job in the media market.

He called his dad and told him he wanted to come home and work for him at the family business, Wilde Tool, Co., Inc.

“I wanted to work for my dad. I fulfilled that goal.”

After his dad, Marty retired from Wilde Tool, Froeschl felt he had options if an opportunity arose.

In 2018, Froeschl ran for the Ward II seat and won. He was sworn in that December.

He ran for City Council and set out to do what he’s now doing in this role. Froeschl wanted to work in the family business and work on the City Council to gain an understanding of how the City of Falls City operates. Then he could apply that into Wilde Tool in the future.

“I thought, I can use this timeframe to learn how to be a leader.”

His desire to build the Wilde Tool brand is almost equal to trying to make Falls City thrive.

“Everything that I loved and cared about doing for the employees of Wilde Tool I feel like I can do for the citizens of Falls City,” said Froeschl.

It was there as a City Councilman that Froeschl learned about the projects going on at EDGE.

“I started to realize what a neat job she [Beckie Cromer] had and how cool it was. I always thought, man, that would be a fun job, but Beckie’s so good at it. She’s young enough she’ll probably have this career forever and this may never be available to me.”

Then he got the e-mail about Cromer’s resignation.

“I was like, this could be it,” said Froeschl.

He knew it was a huge opportunity, but didn’t want to give up the dream of building Wilde into a national brand. It wasn’t until other people encouraged him to take a deeper look into it that he decided to apply. They told him he could do more for Falls City through EDGE, so he took the plunge. Froeschl didn’t want to resign from City Council but knew that he had to.

That choice was a difficult one.

That wasn’t the only change he would have to make.

“I wasn’t going to leave [Wilde Tool] for just anything. It was hard. I love that place. It was very, very hard. The whole goal was to work with the old man, and I feel like I completed that goal,” said Froeschl.

His time with Wilde Tool has prepared him for this position. He’s ready to sell Falls City to potential incoming businesses.

Froeschl said people want to know that you as a person will take care of their needs and that’s what he plans to do in this new role.

The incoming executive director said his position’s overall goal is to make sure the local economy thrives. EDGE gives local businesses a point of contact for any investments they want to make in their businesses. If government funding or grants become available, it’s Froeschl’s duty to make businesses aware of those and keep an eye on legislative bills that are helpful to the community.

Former Executive Director Beckie Cromer has made the transition smooth for Froeschl. She’s currently on retainer and helping where she can.

“It’s very nice. She’s very organized. They’re very big shoes to fill, said Froeschl. “You know, this is her baby. She put a lot of time and effort into this.”

With less than a week under his belt, Froeschl already has his eyes on the future, looking at how he can make his mark. His first goal is an important one, explaining that Falls City is at the end of the electrical grid, he’s educated himself on what that means for the city. According to Froeschl, Falls City is somewhat limited on growth and what we can build because of the struggle for power.

“It’s a little of the chicken and the egg,” said Froeschl. “If a company comes to EDGE and says we want to build on your site, but you already have these businesses here in town, what if they want to grow? If you only have access to X amount of power, how can we thrive in your community?”

Falls City has access to rail lines, a good population that meets employment goals but the city is in a difficult situation for energy, it makes it difficult to sway industrial businesses to come to town.

“Goal number one and it’s of the utmost importance, is how does Falls City get access to more power? I don’t know if it will ever happen in my lifetime, but setting the foundation for a little green energy, whether it’s solar, wind any of that. We got to figure out a way to create more energy so that we can bring these businesses to town,” said Froeschl. “Or we’ve got to go find businesses that are less into production and operations. Like maybe a distribution center where they just need to turn on the lights and they got a couple of conveyor belts and they’re not running forging hammers all day that soak up all the energy.”

Froeschl knows the foundation is there for these businesses, access to the rail lines, interstate with a brand new bridge that can now be a thoroughfare. A desirable cost of living, a great library, schools making investments, a new ballpark, renovations to Prichard Auditorium, a new aquatic park, hospital and learning center.

“All those pieces are in place to make Falls City the best that it can be without the power. So, I think power is the biggest thing. That is the goal,” said Froeschl. “When the Jaycees gave me the Distinguished Service Award, the whole theme of that speech was be the brand. I think Falls City has a great brand and I think every day when I come to this office it’s going to be about making that brand stronger. I’m grounded here and I’m excited to do what we can for this little, small dot on the map.”