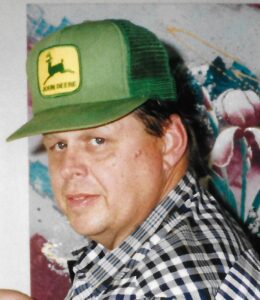 Darrell Richard Chandler, 72, formerly of Peru, Nebraska was born on July 19, 1948, in Humboldt, Nebraska to William “Bill” and Esther (Harms) Chandler.  He was the fourth and youngest son to be born to this marriage.  The family at the time of his birth lived on a farm outside of Verdon where Darrell attended kindergarten through 2nd grade at Dawson public school and half of third grade in Verdon.   The family moved to Humboldt where his dad farmed and he attended a one room country school and Humboldt public school.  The family moved to Peru around 1960 where his dad was the first custodian at the new Student Center at Peru State College.  Darrell attended Peru Prep and graduated from high school with the class of 1966.  He then attended PSC for a year and a half before working for the City of Peru for a year.  Darrell then began working at Wood carve Cabinet Factory (later called Triangle Pacific then Armstrong).  He first worked in the paint department but the majority of his time was spent in the mill room department.  Darrell worked around 35 years before he had to take disability due to arthritis.

Darrell passed away from complications from the Covid-19 virus on Monday, November 23, 2020, at St. Elizabeth’s Medical Center in Lincoln, Nebraska having reached the earthly age of seventy-two years, four months and four days.  He is preceded in death by his parents, an infant brother Gary, father and mother-in-law Russell and Edna Conrad, and many cousins and all of his aunts and uncles on both sides.

A Celebration of Life will be held at 2:00 p.m. on Friday, December 11, 2020, at The Hall Funeral Chapel, 707 15th Street in Auburn, Nebraska with Pastors Ray and Becky Girard officiating.  Social distancing and masks are required for those attending services and a live radio broadcast will be available on FM 88.7

Interment will be at the Mt. Vernon Cemetery in Peru, Nebraska.