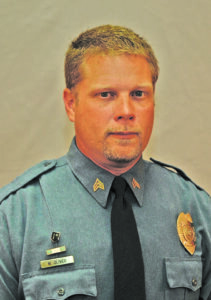 Oliver was a longtime employee of the Beatrice Police Department and headed the task force that re-examined the investigation into the “Beatrice Six” case.

Michael L, Oliver, 54 passed away on December 4, 2020. He was born on April 29, 1966 in Humboldt, Nebraska. Mike grew up in Shubert and Falls City, Nebraska, graduating from Falls City High School in 1984. In 1986, he started a long career in law enforcement beginning as a deputy with the Richardson County Sheriff’s Office.

On December 17, 1991, he started as a patrol officer for the Beatrice Police Department. Mike spent the next 26 years rising up the ranks from road patrol officer, Investigator, Sergeant, and Lieutenant. He spent time serving on the departments Emergency Response Team, and while as Lieutenant commanded the Investigations unit, including the Crime Scene Team, the K-9 unit, SEADE drug task force, the school resource officers, and the Communications Center.

Mike had a distinguished career which included receiving the highest award given to a police officer, the Medal of Valor, on two separate occasions.

Mike enjoyed golfing, camping, watching his kid’s sports events, spending time with his wife, grandchildren, and family. He will be remembered for how he lived, full of enthusiasm for his family, his friends, and his fellow officers. Mike always believed in fighting for what was right. He will also be remembered for his contagious laugh.

He is preceded in death by his grandparents, Dale and Lorene Oliver; grandparents, Gordon and Leona Lundy; uncle, David Oliver; and brother in-law, Chris Bretthauer.

Funeral services will be held at 2:00 PM, Saturday, December 12, 2020 at the Beatrice City Auditorium with Pastor Jack Magness officiating. Procession following the service to the Beatrice Veterans Club for full Police Honors. Social distancing will be observed and masks are required. Visitation will be held 9:00 AM to 8:00 PM, Friday, December 11, 2020 with the family greeting relatives and friends from 5:00 to 7:00 PM Memorials may be sent to Harman-Wright Mortuary for the family’s choice. www.harmanwrightmortuary.com Harman-Wright Mortuary & Crematory, Beatrice, is in charge of arrangements.