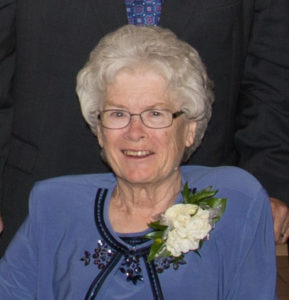 Rose Ann Sheets, 82, of Lincoln passed away on March 6, 2019. She was born November 28, 1936, to Joseph and Mabel (Mooney) Friedell in Elgin, NE. She was raised in Elgin, NE. In 1956 she married James Sheets. She attended the University of Nebraska School of Pharmacy and graduated in 1968. She and Jim purchased Sheets Pharmacy in 1969 in Falls City, NE. She later was the Falls City Community Hospital pharmacist for several years. Rose Ann was awarded National Pharmacy Family of the Year in 1972 (along with her husband, father-in-law, mother-in-law and Jim’s twin brother Jerry, who were all pharmacists). Along with Jim, she was a charter member of the Falls City Volunteer Ambulance Squad in 1974. She also served as president of the Nebraska Pharmacists Association. Jim and Rose Ann moved to Lincoln in 1996 to proudly cheer on their grandchildren at all their sports and music events.