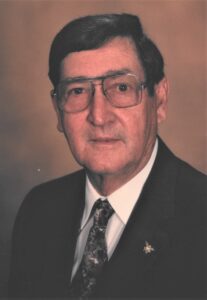 Donald Milton LaCounte, 96, of Reserve, Kansas, died Friday afternoon, July 17, 2020, at Maple Heights Nursing Home in Hiawatha, where he had been a resident for ten years.

On October 4, 1944, he married Nellie Proctor in Atchison, Kansas.  They farmed their entire married life at the Reserve homestead.  Don farmed until he was 82 years old, then went to Maple Heights when he was 86 years old and died when he was 96 years old.

Don was a member of the Methodist Church of Reserve, Kansas, where he served on many committees, and at its closing, transferred his membership to the First United Methodist Church of Hiawatha.  Don’s faith was very important to him all his life.  He graduated from Reserve High School and attended the Reserve Alumni every year.  He served on the Reserve School Board for many years.

He was preceded in death by his wife, Nellie LaCounte October 24, 2007, his brothers and sisters Harold LaCounte, Irene Mahadi, Josephine Rhodes and Betty Tatum; his parents Julius & Blanche LaCounte and his stepfather A. B. McCrerey and an infant son Donald LaCounte Jr.

His family is so appreciative of the loving care given to Don by the caregivers at Maple Heights.

Services will be private on July 27, 2020, with burial at Mt. Hope Cemetery, Hiawatha, with Reverend Andrew Finch, of First United Methodist Church, officiating.

In lieu of flowers, memorial contributions in Don’s memory are suggested to the First United Methodist Church, Hiawatha, Kansas, sent in care of Chapel Oaks Funeral Home, 124 S. 7th St., Hiawatha 66434, who is assisting the family with arrangements.