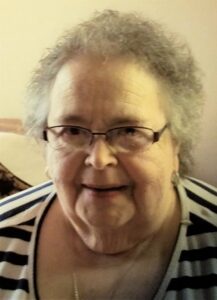 Marceliene Belle “Patty” Dean, 86, of Robinson, died Saturday afternoon, July 18, 2020, at the Hiawatha Community Hospital.  She previously had been a resident of Maple Heights Nursing Home in Hiawatha.

Patty, as she was known to family and friends, was born in Kansas City, Missouri, January 11, 1934, and was raised by Mimi and Loyd Caldwell.  The family moved to Falls City, Nebraska, where she attended Sacred Heart Catholic Schools, later graduated from high school in 1952.

Patty was a CMA (certified medication aide), worked in nursing homes and hospitals for over 50 years, retiring in 2015, at the age of 81.  She worked her whole life taking care of others, giving what she had to make everyone else’s life better.  She was a companion to Fred Cole of rural Highland for over 20 years.

Patty was a member of Saint’s Peter and Paul Catholic Church of Falls City.

She was preceded in death by her adopted parents, son Harry Dean, brother Howard Maxwell.

A register book will be available at the funeral home to sign at Chapel Oaks Funeral Home.