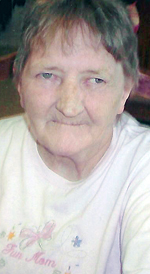 Rosaline “Rosie” Violet Lochmann, 78, of Falls City, passed away on Sunday, March 26, 2017 at Community Medical Center. She was born on March 23, 1939 in Arkansas to Emmit and Stella Jane (Campbell) Pomeroy.

She was a homemaker most of her life and enjoyed crocheting, bowling, painting, and spending time with her grandchildren.

Rosie was a member of St. Paul’s Evangelical Lutheran Church in Falls City.

She was preceded in death by her parents; husband, Jon; grandsons, Collin Hardenberger and Cody Whittington; a brother, Howard Pomeroy; sister, Mary Pomeroy; and daughters-in-law, Nancy and Shauna Hardenberger.

Hall Funeral Chapel, of Falls City, is in charge of arrangements.