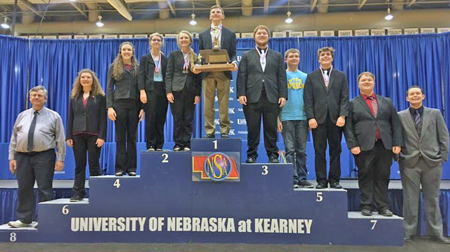 One year after finishing runner-up in Class C2, the Humboldt Table Rock Steinauer Speech Team took the next step, winning the 2017 Nebraska State Activities Association Class C2 Speech Championship on Friday, March 24. They won a narrow victory, with 110 points over State Runner up Crofton, which had 106 points.
The contest was  held on the University of Nebraska-Kearney campus.
The team medaled in seven events: Chloe Workman, second in Serious Prose, second in Poetry; John Kanel, second in Persuasive Speaking, fifth in Entertainment; Lauren Patzel, fourth in Serious Prose, fourth in Informative.
The Duet Acting team of Chase Merwin and Alex Fairchild-Flynn was third.
Other members of the team that competed at the State Championships were Kendall Werts, Entertainment; Tanner Merwin, Persuasive Speaking; Trenton Plager, Extemporaneous Speaking; and Matilyn Stalder, Informative.
The team is coached by Carl Linnerson.
The HTRS Speech Team owns a storied tradition, dating back to before the merger, both at Humboldt High School and Dawson-Verdon. HTRS finished runner-up in Class C2 in 2013, exactly 10 years after taking the sweepstakes in ‘03. HTRS was runner-up in C2 in ‘02, as well.