Dave graduated from Falls City High School in 1960 and served in the Nebraska National Guard from 1965 to 1971. Following 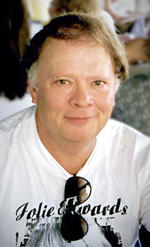 his service, he became employed in the hospitality industry and managed the Vet’s Club, Oasis and Falls City County Club. He retired in 2006.

Dave was a member of the American Legion Post #102 at Falls City.

He is survived by his daughter, Jolie (Marty) Edwards, of Papillion; brother, Frank Reavis, of Lincoln; and grandsons, Quaid and Lane Edwards.

A memorial service will be held at 2 p.m. Thursday, Feb. 16, 2017 at Dorr & Clark Funeral Home, with Rev. Tim Boatright officiating. Inurnment will be in Dorrington-Reavis-Towle Mausoleum at Steele Cemetery. Military graveside honors by the Falls City Ceremonial Honor Guard. The family will receive friends from 6-8 p.m. Wednesday at the funeral home.