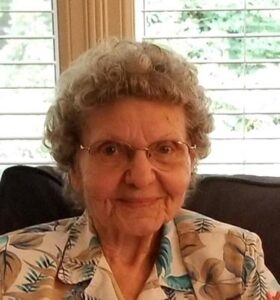 Rolene was born in Seward, Nebraska, on October 11, 1928, to Adolph and Clara Hermann.  She grew up with four siblings:  Harold, Milton, Roland and Willa Mae in Fall City, Nebraska.  She graduated from Fall City High School and then went to Beauty School to become a beautician.

Rolene married Robert Buford Titus on May 21, 1950, and together they had two children, Rick and Christi.  Robert died in a car accident in 1957 and three years later, Rolene moved to Oregon to be with her in-laws.

In 1961 Rolene met Lawrence Henningsgard. They were married on August 12, 1962, and they had many wonderful years together.  Rolene worked at Duckwall Fruit until they bought Hacketts Appliance Store, where Larry had worked for many years.  They owned and operated the store until they retired.

Rolene enjoyed being outside, either in her vegetable garden or tending to her beautiful flowers.  She was very active in her church and loved the view of Mt Hood from her home.

After Larry passed away in January 2013, Rolene found comfort in her family, deep faith and church, friends, and garden.  She moved to Brookside Manor in 2017.

Rolene passed away on April 9, 2021, at Brookside Manor in Hood River, Oregon.  The family would like to thank Heart of Hospice and the staff that helped Rolene at Brookside.

Memorial contributions can be made to Heart of Hospice or Immanuel Lutheran Church in memory of Rolene, c/o Anderson’s Tribute Center 1401 Belmont Avenue, Hood River, Oregon  97031.  Visit www.AndersonsTributeCenter.com to leave a note of condolence for the family.