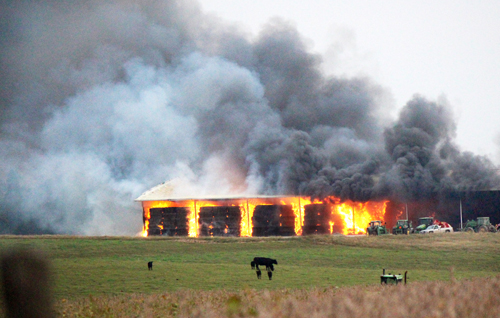 A Tuesday morning fire on the Herbster Angus property northwest of Falls City completely destroyed a massive shed built just this year and most of the building’s contents, including a front-end loader and perhaps thousands of large bales of hay. A specific damage estimate is not yet available, though the figure will likely involve seven figures. The fire’s origin remains under investigation by the State Fire Marshal’s Office.
The building, containing 24,000 feet of floor space, was very quickly engulfed in flames and remnants continued to burn for several days, into the weekend. The 911 call came at 7:45 a.m. Tuesday and firefighters responded almost immediately and remained on the scene all day. Members of the Falls City Rural Fire Dept., as well as those from the Falls City Volunteer Fire Dept. and Verdon Dept. battled the fire. They were able to save two tractors, a 30-foot flatbed trailer and silage kit.
“The guys did a phenomenal job getting the stuff out that they did,” Herbster Farms Manager Ed Raithel said. “Within 8-12 minutes, it got so hot you couldn’t do anything,” he said. “It was unbelievable.”
“It was totally involved when we got the call,” FC Rural Fireman Kenny Arnold said. “We put a bunch of water on it, but it was half full of hay and there was a massive amount of material there.
Herbster Angus Farms is owned by Charles W. and Judy Herbster.