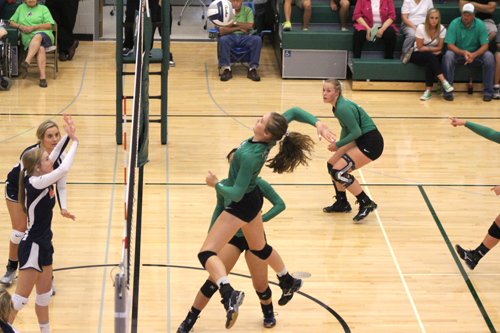 The Falls City Sacred Heart Volleyball team opened their 2016 season last Thursday, Sept. 1, at home.  The Irish had no problems as they defeated Doniphan West in straight sets, 25-13, 25-9, 25-6. Leading the Irish was Haylee Heits with 11 kills on the night.
The Irish then traveled to Weeping Water for a tournament on Saturday that they once again dominated. The Irish defeated Conestoga, 25-14, 26-24; They then defeated East Butler, 25-20, 25-9. The Irish continued on their roll defeating Weeping Water, 25-14, 25-6 to win the tournament. Randee Witt lead the team in ace serves with nine, 91.7 percent, 18 digs and 11 assists.
Haylee Heits served seven ace 94 percent, 32 kills hitting .491 and 16 digs. Jade Hill had 30 kills .473 and 16 digs three blocks. Lexi Barnes had 60 assists 16 digs. Ahren Ebel had five ace serves and 16 digs. Sara Wertenberge lead in blocking with four.
On Thursday, the JV lost to Doniphan West.
The ladies play Diller-Odell Tuesday at 5:30 with a reserve game, then JV followed by Varsity.

For this week’s Irish football results pick up your copy of the Falls City Journal today or purchase an E-edition on this website.