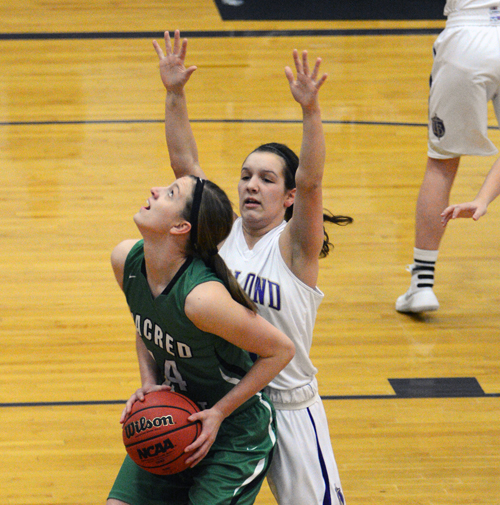 FCSH senior Maggie Goltz scored 20 and eclipsed 1,000 career points Saturday afternoon, leading the top-ranked Class D2 defending champions to a 43-27 victory at St. Joseph (MO) Leblond. Junior Haylee Heits was completely dominate inside, grabbing eight offensive boards and a dozen overall, while blocking four shots.
Goltz becomes the ninth member of the 1,000-point club at Sacred Heart, joining ‘15 FCSH graduates and four-year starters Abby and Elizabeth Magdanz as the newest initiates. Katelyn Wheeler owns the all-time school record with 1,408 points and Goltz could feasibly catch her, though the point guard would have to practically double her shot attempts and average 20 points per game.
It likely means little, as long as each game is a victory. And that’s the way its been for going on 12 months now. FCSH lost to Sutton in the first round of the Freeman Holiday Tournament on Dec. 30, 2014 and since then, they’ve run off 26 consecutive wins and need one win tonight and a championship at Freeman to post an 29-0 banner 2015.
“We’re very good defensively,” FCSH Coach Luke Santo said, “that’s a big part of it. We have four starters that are six-feet tall – and our sixth is, too – it’s just unbelievable for a Class D2 school. They’re so long that teams can’t shoot over us and they get frustrated.”
That may be putting it mildly; FCSH is off to a 6-0 start in its title defense and its last five opponents haven’t even put 30 points on the board. Over the course of the entire last year, only three of the 26 opponents reached 40. Those are crushing defensive numbers.
The team lost the four-year starting Magdanz twins, both 1,000-point career scorers, but regained Heits, who missed all of last year with a knee injury, and are much improved in the frontcourt with her hitting the boards.
“She’s very strong – it’s great to have her back,” Santo said. “Haylee has real strong hands and has good footwork, too.”
Elmwood-Murdock, a Class C2 school, was a 19-win team a year ago and is traditionally a pretty tough out, but they aren’t bringing a very experienced team to Prichard tonight. Besides, the Irish held them to 28 points a year ago.
Scoring vs. St. Joseph Leblond
FCSH — Goltz, 20; Fiegener, 2; Wertenberger, 2; Barnes, 7; Hill, 5; Keithley, 2; Heits, 5.
Scoring vs. Humboldt-TR-S
FCSH — Huppert, 4; Ebel, 2; Goltz, 11; Fiegener, 2; Witt, 2; Wertenberger, 3; Barnes, 9; Hill, 4; Parrish, 4; R. Keithley, 3; Heits, 8.
HTRS — Binder, 4; Blank, 2; Stalder, 3; Jena Fink, 4; Svoboda, 6; Reyes, 7; Ja. Fink, 2.
Scoring vs. Lewiston
FCSH — Ebel, 6; Goltz, 16; Fiegener, 4; B. Coonce, 2; Wertenberger, 10; Barnes, 6; Hill, 9; Parrish, 2; Heits, 8.