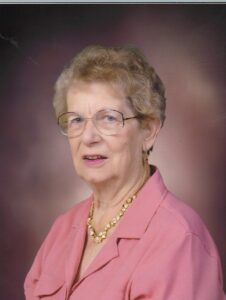 It is with great sadness that the family of Dorothy Ruth Steinhauser announces her passing on Tuesday, October 6, 2020, at the age of 90 years.

Dorothy Ruth Johnson was born on November 13, 1929, near Hamill, SD, the fourth child of Harry and Clarice Johnson.  Dorothy grew up and graduated high school in Spencer, NE. Dorothy met Clarence (Steinie) Steinhauser  and they married on June 28, 1948.

In their early years of marriage, Clarence  and Dorothy farmed in the Naper/Butte area. They moved to West Point, NE, in 1956 and raised their children in West Point until 1968. During these years, Dorothy worked as a Nurse Aide at the hospital  and nursing home. They moved the family to Falls City, NE, in 1968. They purchased and opened the local eight-lane bowling alley. In 1972 they moved their family back to West Point, NE and purchased the bowling alley in West Point. Dorothy, ever the organizer, was instrumental in the formation of leagues and activities that made both bowling alleys the successes that they were. After returning to West Point, they also purchased and remodeled two 1800’s homes for rental properties. Once all their children were grown and moved away from home, Clarence and Dorothy sold their West Point properties and moved to Arizona, where Dorothy lived out her life.

A Celebration of Dorothy’s life will be held in Nebraska at a time to be determined and announced at a later date.