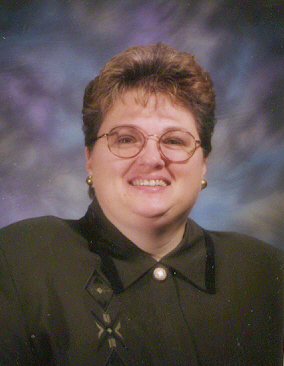 Peggy Sue (Ramer) Vaughn, 56, of Falls City, Nebraska was born on March 31, 1959, in Falls City, Nebraska to Eugene and Elaine (Liebsch) Ramer.  She was raised in Falls City, Rulo, and Dawson, Nebraska where she attended public school through the 11th grade and graduated her senior year from Sacred Heart High School with the class of 1977.  After graduating, Peggy attended Peru State College and graduated in 1981 with a B.S. in Special Education.  She then furthered her education by attending Northwest Missouri State and received her Masters Degree in Special Education in 1985.

On June 16, 1984, Peggy was united in marriage to John Vaughn at The Christian Church in Humboldt, Nebraska.  Peggy and John were blessed to have a son, Zeth.  The couple lived in Dawson, Nebraska from 1984-1994 then Seneca, Kansas from 1994-2002 before moving to Plainview and South Sioux City, Nebraska from 2002-2006.  The couple returned to Falls City in 2006 where they have lived since.  Peggy was a Special Education teacher for the Hiawatha and Horton School District for thirty-two years.  She taught Sunday school at The Christian Church in Humboldt and in 1990, Peggy was awarded the Brown County Special Education Teacher of the Year.

Peggy’s greatest loves were her faith, family, and students.  She was a loving wife, mother, and teacher that truly loved working with her students at school.  Peggy passed away suddenly on Wednesday, December 23, 2015, at the Community Medical Cneter in Falls City, Nebraska having reached the earthly age of fifty-six years, eight months, and twenty-three days. She was preceded in death by her parents and mother-in-law Mary Ann Vaughn.

Funeral Services will be held at 10:30 a.m. on Tuesday, December 29, 2015, at The Christian Church in Humboldt, Nebraska with Pastor Howard Blecha officiating.

Inurnment will be at the Heim Cemetery in Dawson, Nebraska at a later date.