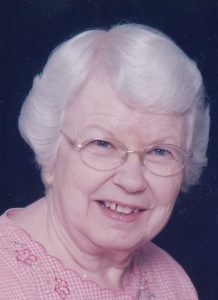 Gail M. Pupkes, 91, of Jefferson City, Missouri passed away on November 14, 2022 at SSM St. Mary’s Hospital. She was born on December 20 1930 in Hiawatha, Kansas; a daughter of the late Samuel Todd Brown and Rosella Eva (Adams) Arndt.

She was a 1948 graduate of Sabetha High School in Sabetha, Kansas. Gail was married to William Pupkes on November 18, 1950 and they made their home in Falls City, Nebraska. In 1965 they moved to Gladstone, Missouri. In retirement they moved to Jefferson City to be near their daughter and grandchildren. She was a member of King of Kings in Gladstone and Faith Lutheran in Jefferson City, Missouri. Her career included telephone operator, legal secretary and public-school secretary. Her hobbies included reading, crossword and other puzzles, writing letters to family and friends. Most of all she cherished times spent with her daughter and grandchildren.

In lieu of flowers, expressions of sympathy may be made to Calvary Lutheran High School, 2525 Rt. B, Jefferson City, Missouri 65101.

Arrangements are under the direction of HOUSER-MILLARD Funeral Directors, 2613 West Main Street, Jefferson City, Missouri 65109 (573) 636-3838. Condolences may be left online for the family at www.millardfamilychapels.com.