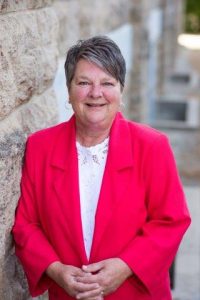 Rhonda Lynn Standerford, 69, of Humboldt, Nebraska was born to Harold and Marylou (Staples) Hurd on October 6, 1953 in Kansas City, Missouri.  She attended junior high at Pettis County Rural #1 School and graduated from Knob Noster High School in 1972.  She was united in marriage to Tom Standerford on June 27, 1981 at Lost Bridge Lodge in Garfield, Arkansas.  This union was blessed with and raised two daughters Brandi and Dawn. Rhonda was a stay-at-home mom and raised her daughters until Brandi and Dawn started school.  She then attended Peru State College from 1986-1990 and received her bachelor’s degree in Business and Accounting.  In 1997, Tom and Rhonda opened up their hearts and home to another daughter Jodie Hoarty.   Rhonda worked for several area businesses, including as a bookkeeper for Merz Farm Equipment and SENDD in Humboldt until her health began to decline and she later became a resident at Colonial Acres Nursing Home in Humboldt, Nebraska.

Rhonda loved a picnic whether it was taking dinner to the field, a big family gathering, or an impromptu picnic with grocery store chicken at the “Cinderella” park with the girls. She found amazing happiness being a farm wife except when it came to rounding up cows out in the dark.  She was known by many to make the best fried chicken, the world’s best toast, and Velveeta mac and cheese that she must have stirred with her fingers. One always knew they could count on her for hours long conversations either sitting at the kitchen table with a fresh pot of coffee or on the phone long distance. And she became the bonus mom and grandma of the area teenagers, her stubbornness and determination were shown through all-nighters pulled sewing flannel shirts, nightgowns, or cloth dolls for Christmas morning, and never letting you win at Scrabble or Yahtzee. Rhonda’s bucket-list included traveling to Ireland, and in the winter of 2019, she and Tom were able to take the trip of a lifetime with her sister, Kim and her husband to visit beautiful Ireland, taking in the food, the music, and the landscape.  Rhonda passed away on October 27, 2022, In Humboldt, Nebraska having reached the earthly age of 69 years.

Rhonda was preceded in death by her parents, Harold and Marylou and her parents-in-law, Jim and Jeanne Standerford.

Memorial services will be held at 11:00 a.m. Tuesday, November 1, 2022 at the Christian Church in Humboldt, Nebraska with Pastor Howard Blecha and Don Fankhauser officiating.

Memorials may go to the family’s choice for later designation.

Inurnment will be in the Mound (Prospect) Cemetery, east of Humboldt, Nebraska.

Online condolences may be left @ www.wherrymortuary.com.