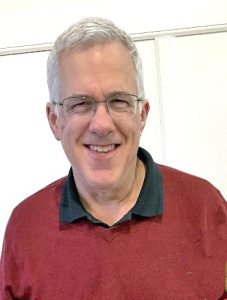 He met Karen Morehead at church in Washington D.C. and the couple was married on February 17, 1991. Kirk and Karen celebrated their 31st wedding anniversary this year and together they dedicated their lives to raising their four children. At age 19 he became a believer in Jesus Christ and faithfully served Him all his life. Kirk enjoyed spending time playing guitar and making up personalized songs for each of his children, whom he called by creative and clever nicknames. He was a skilled writer and loved to spend time reading. He sought knowledge through books and challenging discussions with others. He was passionately devoted to the improvement of his relationships and his health. He was an avid fan of the New England Patriots and the Nebraska Cornhuskers. Through his intentional care for others, Kirk leaves a lasting legacy of love.

Burial will be private at Steele Cemetery in Falls City, Nebraska.

A memorial service will be held on November 19 at 11 a.m. at Elgin Evangelical Free Church, 1900 Big Timber Road, Elgin, IL 60123. Lunch will be provided at the church immediately following the service.

No flowers please. The family asks instead that memorial donations be made to Valley Avenue Baptist Church, where Kirk’s son Eric is a member.  The mailing address of the church is 2023 Valley Ave, Falls City, NE, 68355.