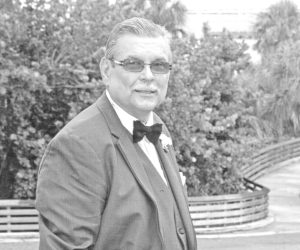 Frank Watkins, 64, Port St. Lucie, FL passed away peacefully on May 28, 2018 at the VA Medical Center in West Palm Beach, FL, after a seven-year battle with multiple myeloma, with his wife by his side. He was born Jan. 5, 1954, the middle child of Margy and Bob Watkins, of Falls City.

As a 1972 Falls City High School graduate, he enlisted in the Navy and worked on the USS Lewis &Clark, honorably discharged in 1980.  He began college studies at the University of Florida (Gainesville), including studying abroad in Europe, and finishing with a Bachelor’s from the University of Nebraska (Omaha) in 1985.  After graduation, he was in sales for Martin Outdoor Advertising, El Centro, CA.  His work with Assex Automotive took him to Texas, Delaware, and eventually to Tampa, FL, where he met the love-of-his-life, Michele.

In 1994 his mother moved to Tampa after Bob passed away.  He cared for Margy until her death just two months ago.  During his time in Tampa, he worked Security for Hard Rock Hotel & Casino, retiring in 2016. Upon retirement, his Mom and he relocated to Port St. Lucie to be closer to Michele.   They dated and traveled many places over the years, and were married on June 3, 2017, in Jensen Beach, FL.  It was a glorious celebration culminating in a trip-of-a-lifetime honeymoon all over Italy.

Frank will always be remembered for his generosity, his love for animals, and his love of movies. He was always available to assist his siblings/family—young and old.  He was preceded in death by his parents and sister, Flame Partridge.  Survivors include his wife, Michele, and their beloved Jack Russell poodle, Tanner, Port St. Lucie, FL, brother, Greg (Cindy), Springfield, MO, and niece, Kelsey Watkins, Sarasota, FL, and many extended relatives and friends.

Frank was given the military Honor Walk at the VA Medical Center.  The military Flag Fold Presentation and memorial services were held at Haisley Tribute Center, Port St. Lucie, on June 2, 2018, with Fr. Lee Ganim officiating.  An eagle’s eye video tribute and guestbook may be viewed online at haisleyfuneralhome.com.

Suggested contributions may be made for any/all cancer research, VA Medical Center Fisher House (W Palm Beach, FL), or the charity of your choice.