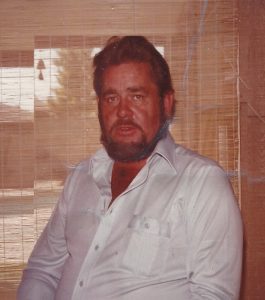 Born on his father’s birthday, July 27, 1941, he passed away on January 13, 2022, surrounded by his daughter and granddaughters after a brief illness in his home in Tempe, Arizona.

Born to Albert and Leola (Wissman) Pflaum in Rulo, NE, he was raised with his siblings Joyce (Jim Nielsen), Rosalee (Wanchisen) and Joe (Vicki Pflaum), in Falls City.

At 17, he enlisted in the U.S. Army.  After a brief tour that took him to France, Italy, and Korea, he moved to Phoenix, Arizona where he met his first wife, Phyllis, and they had a daughter, Lisa. They later divorced, and he moved to Tempe where he met his second wife who preceded him in death.

He worked for the State of Arizona’s Department of Transportation as a Senior Surveyor for 47 years before retiring. There isn’t a freeway or state route in Arizona that he didn’t survey or travel on and he let you know it. The job suited him well as he loved to drive and see new places. As his grandchildren are Arizona natives, he was an exceptional historian during road trips, telling us what was there previously and how much the area had changed.

During his retirement, Kenny spent his time traveling. His favorite destinations were beachfronts and places he could fish. He also spent time attending his granddaughter’s various sports activities and being a great cheerleader from the sidelines. If he wasn’t traveling, his time was spent watching the Phoenix Suns basketball team and waiting for his weekly carrot cake made by his baker, granddaughter Vanessa. Wednesdays were dinner dates with his granddaughter Annalisa, car repairs and yardwork days were spent supervising granddaughter Lexus and his afternoons were spent following his youngest granddaughter Monica to her sporting and robotics events.

He is survived by his three siblings, his daughter Lisa Regalado and his four granddaughters, Annalisa Regalado, Lexus Martinez, Vanessa Regalado, and Monica Regalado.

Always remembered by his family as “Kenny”, “hey, old man” or “papa”, he is dearly missed.

His family will be hosting a celebration of life at