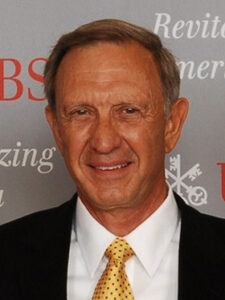 Ron attended the University of Nebraska–Lincoln on a four-year Regents scholarship, majoring in math and physics. After graduating in 1965, Ron continued at UNL, working as a graduate assistant and developing several statistical programs used by the University. During that time, he purchased and expanded two information technology companies—TAG/TMI. He moved to Texas in 2005 when he sold the companies to Perot Systems. Despite moving, Ron remained true to his Nebraska roots. He was a proud lifetime member of the Lincoln Independent Business Association (LIBA), dating back to the 1980s and even held a key to the city. Refusing to “retire,” Ron went on to establish several more companies, his favorite being Curazene, a biotech research firm, which united his love of science and research with his passion for helping improve the lives of others.

Ron took pleasure in being philanthropic in many areas. But above all else, he loved education, funding scholarships at both Taylor University and UNL (and because of his own small-town roots, he designated that the UNL scholarships be for rural Nebraska high school students). Ron’s interests spanned countless topics. Whenever possible, he used his inquisitive mind to understand how he could improve the health of those around him. And with his appetite for information came a great faith. He said that science constantly reminded him of the awe and magnitude of God’s creative power.

Although he never seemed to have much in the way of “spare” time, when he could, Ron enjoyed flying his Bonanza plane, country-western dancing with his wife, Tracey of 17 years, and driving (too) fast. He was a lover of all things sports—whether he was playing basketball, watching Nebraska football, coaching his son, Jaden’s, baseball team, or cheering on his son-in-law, Ryan’s, track team. He and his son constantly compared stock market tips and he relished “dropping in” on his daughter, Katy, regardless of where she lived in the country. Ron refused to let age define his life and was still waterskiing as recently as a year and a half ago. He had a soft spot for pets even though he swore he didn’t like them. He would talk about his two children with anyone who would listen. He adored being “Bumpa Won” to his young grandson, Miles. He loved his family with his whole heart.

Ron is survived by wife, Tracey Lockard of McKinney, TX, son Jaden Lockard of Austin, TX, daughter, son-in-law, and grandson, Katy, Ryan, and Miles Harkleroad of Portland, ME, brother and sister-in-law Sid and Donna Lockard of Shubert, NE, and many other loving family members. Ron is preceded in death by his parents.

A celebration of life will be held at a later date due to COVID. In lieu of flowers, the family asks that donations in memory of Ron be made to the Lockard Family Foundation at the University of Nebraska. Please contact the Hemmingsen Funeral Home in Auburn, NE for details: (402) 274-3631 or hemmingsenfh@gmail.com.