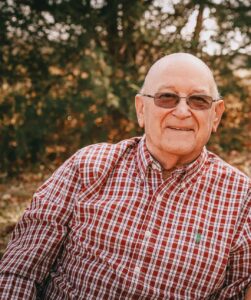 Ronald Louis Rist, 77, of Humboldt, Nebraska was born to Louis and Marjorie (Baker) Rist on December, 21 1943 in Humboldt, Nebraska.  Ron grew up in Humboldt and graduated from Humboldt High School in 1962.  He continued his education and attended college at Peru State College.  Ron worked at Cooper Nuclear Station in Brownville, Nebraska for over 20 years.  On May 24, 1981, Ron was united in marriage to Sherryn Ann Bucher at Faith Lutheran Church in Humboldt, Nebraska.  This marriage was blessed with two daughters, Ronda and Rebecca.  Ron was a member of Faith Lutheran Church in Humboldt and the Sons of American Legion Post #269.  He was also a proud member of the Humboldt Lions Club.

Ron loved his family and friends.  His grandchildren were the light of his life.  He enjoyed gardening, yard work, decorating outdoors for the holidays (especially Christmas), dedicating his time giving back to the community and others and listening to polka music.  Ron loved a good joke and had a great sense of humor.  Those of you who have called their home phone and got their answering machine would understand.

Ron passed away on Saturday, January 23, 2021, at Bryan West in Lincoln, Nebraska having reached the earthly age of seventy-seven years, one month and two days.  He is preceded in death by his parents, mother and father-in-law Alma and Leo Bucher, step-son Russell Usher, in addition to brothers-in-law and sisters-in-law.

Funeral Services will be held at 10:30 a.m. on Monday, February 1, 2021 at Faith Lutheran Church in Humboldt, Nebraska with Pastor Rick Boring officiating. A livestream of services will be available on the Wherry Mortuary/Monument Facebook page for those not attending services.  Interment will follow services at The Bohemian National Cemetery south of Humboldt, Nebraska.

Visitation will be from 1-8 p.m. on Sunday, January 31, 2021, at the Wherry Mortuary, 207 N. Nemaha Street in Humboldt, Nebraska.  Family will greet friends from 6-8 p.m. at the mortuary with masks and social distancing required for those attending.

Memorials contributions may go to the family’s choice with a later designation.