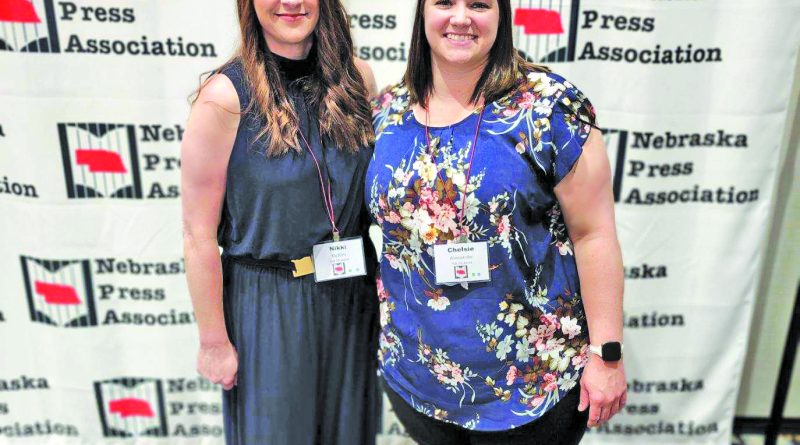 Chelsie Alexander earned second place in two separate categories, including use of computer graphics produced in-house for her Halloween Masthead; and the category Building Circulation for the “What’s on the Menu Today?” page, which the judges said “added value to the reader who could hold on to it for the week.” Chelsie also earned third place in the Creative Ad Writing category for her Culligan, Scheitel Feed and Three-State Stockyard Ads. The judges said, “The Ad is utterly a stand out in the field or on the page as in this case.”

Brian McKim earned first place in the category of Personal Sports Column for his column titled, “The curse of Frank Solich,” the Judges said, “The tale of a sports hero inspires feelings of admirations, reverence and heartbreak, while the author then makes us smile with the moral of, ‘no matter how historic your college program, don’t tempt kharma-or anger the football gods.” McKim also earned second place in the Sports Feature Writing category for his feature titled, “Coach Goltz in a league all of his own.”

Nikki McKim earned first in two separate categories, including Breaking news photography for her photo, “Man escapes house fire,” the judges said, “A lot of fire photos, this one captures the human toll. The single-shot tells the story before you read the caption;” the second win was in the Entertainment Story category for her story, “While Falls City sleeps the Keller family is making sweets.” In the same category, McKim earned the second-place spot for the story, “Comedian Karen Morgan excited to perform live July 9 at Sacred Heart. The Judges said each story was “A pleasure to read, well written, well organized and interesting.” The final win for McKim, the “Maze Brothers release La Flame Rouge,” series which earned second place in the Feature Series Category.

Members of the New York Newspaper Association judged thousands of separate entries from newspapers all over Nebraska.