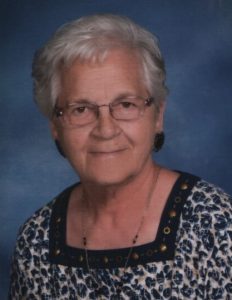 Mary Lou was raised at Rulo and graduated from Reserve High School in 1950. When married to Mr. Simpson they made their home in Rulo and she was a homemaker. Following his death, she worked for In-Home Healthcare for seven years. When she married Mr. Hill, they made their home in Biggsville, IL and she also did home healthcare until she retired in 1998. She moved back to Falls City in 2011 and has lived here since. She was a member of First United Methodist Church, Eastern Star and the Volunteer Ambulance Squad.

Her funeral will be held on Friday, April 22, 2022 at 10:30 AM at Dorr and Clark Funeral Home with Reverend Mike Hader officiating. Interment will be in Rulo Cemetery.

To send flowers to the family or plant a tree in memory of Mary Lou, please visit our floral store.