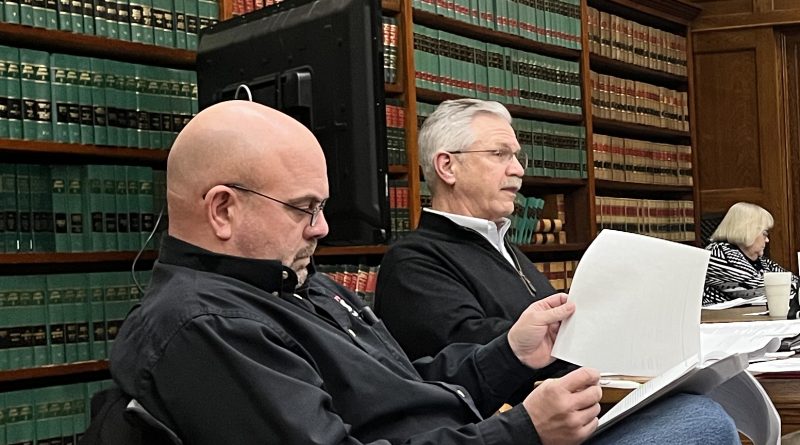 As Citizens Committees usually have the option to review and affect changes to “pre-Schematic” Design drawings, the Committee was asked if any noticeable changes should be made to the Feasibility Drawing. No modifications were suggested. Field added that options exist to enlarge the current commercial kitchen by extension into the existing Armory gymnasium area, should it become necessary, which would cost significantly less per square foot than an enlarged new constructed kitchen—this potential should add another measure of conservativeness to the current cost projection, as a new kitchen area was projected at the new $443/S.F. “Jail” rate. A South Elevation (exterior view) depicting the proposed Addition in context with the existing facility was also discussed.

Sheriff Hardesty and Morehead have projected that Richardson County’s jail population will only continue to increase.

Currently, inmates are escorted by sheriff’s deputies elsewhere throughout eastern Nebraska and into Northern Kansas.

Meanwhile, Morehead said she and other Southeast Nebraska employees are constantly searching for more space for inmates.

In transporting and housing inmates elsewhere, Morehead figured the average cost to Richardson County’s between July 2021 to the present typically cost $55 per day depending on the facility; including some overtime pay (Sheriff Hardesty transports during his time off to save the County money as he is a salaried employee), and the price of gas. Totals do not include wear and tear on vehicles.

To transport to Auburn, Nebraska: 15 round trips, drive time, wages for overtime were $27.75 and $27.00 an hour. Most transports were done during overtime, with Sheriff Hardesty taking a few. If gas were $3.19 a gallon, the approximate total price for gas would be $167.55.

To transport to Washington County, Kansas: two round trips, wages for overtime was $27.75 and Sheriff Hardesty took a trip to cut costs. If gas were $3.19 a gallon, the approximate total price for gas would be $59.98. When Richardson County Sheriff’s Department transports inmates, another set of issues arise.

The average length an inmate is incarcerated in another county’s jail is based on whether or not the inmate is sentenced or needs to be transported back and forth for court. The amount of time could range from two days to a month, but according to Morehead, the average would be approximately nine days.

When an inmate is in the care of another facility, any medical costs they incur will be in addition to the daily rate and must be reimbursed in full. That would include any medication, doctor’s appointments and dental. Currently, Richardson County Jail has a contract with Community Medical Center, which makes it more affordable than someone else’s facility.

Richardson County has spent $13,534.63 from July 2021 to the present on safekeeping and inmate medical costs by housing inmates outside of the County. If you factor in gas and wages, that total jumps to $17,586.83. Based on these totals, the average yearly cost to house and transport inmates would be approximately $42,208.39.

During the Wednesday meeting, Sheriff Hardesty told the Committee that as of February 2, 2022, 58 people had been booked in the jail, with five being arrested that day on a search warrant.

There is significant potential for income to be generated on 20 of the 40 beds being sought in the jail addition. The U.S. Marshals said they would pay to house federal inmates at rates that could generate anywhere between $438,000 to $620,500 per year, depending on what Richardson County Jail decides to contract with them per day. Per generated figures, after hiring four additional staff, which would be the projected number of employees needed based on jail standards requirements-factoring in their wages and insurance, the county income could be $238,792.60 to $421,293.60 per year. According to Jail Administrator Kristin Morehead, these figures are based only on housing Federal inmates, and this wouldn’t factor in any revenue the County would get from other County holds.

Committee members asked if the Sheriff’s Department could request copies of the emails from other Counties and from U.S. Marshals memorializing non-binding offers made to board outside Inmates in Richardson County. This will be needed for the next Committee Meeting.

It’s estimated that the utility prices wouldn’t see much change as the lights are on a schedule, but water usage would increase. Utility bills go to the County Clerk’s office, so figures weren’t readily available.

Field provided the committee handouts regarding projected Hard and Soft Costs in the Needs Assessment Update document. Field had given projections at the meeting two weeks prior but explained that the former copy contained projections for January 2022 Project costs, modified from available January 2021 reference material. He said that Prochaska & Associates is now in receipt of new RS Means Cost Estimating software, allowing use of actual collected cost data for the previous 2021-2022 year. The Feasibility options projected Bond costs have now been recomputed to $5,716,183, and $5,334,071, respectively.

A comment was made that the current cost projections contain an assumption for three percent inflation for the 1 1⁄2-year time between the R.S. Means data for January of 2022 to March of 2023. Field said there was no way of knowing the actual figure at this point, so early in 2022, but the known causes for previously high inflation are now being confronted directly by the government, hopefully leading to a dramatic improvement. Raising the suggested Bond figure to $6 million dollars may account somewhat for this uncertainty and the levels of contingency factors built into the update figures.

The Committee was shown copies of the Nickel Tax statute (NE 23-120), which allows a Nebraska County to levy up to “5.2 cents on each $100 upon the taxable value of all the taxable property in the County” without a ballot issue. Mary Eickhoff reported that the County could include this project, at a projected $6 million Bond value, within the current Nickel Tax maximum levy.

The potential for promoting this project to voters was discussed. Some on the Committee were willing to see the project funded by the Nickel Tax, but some were concerned that there should be more transparency regarding the tax and the public should still be allowed to decide by Bond Referendum. Field said other counties who had previously opted to use the Nickel Tax had also accompanied their decisions with effective publicity and full transparency so that the County taxpayers would understand the need more accurately. Members of the Committee, the Sheriff and Commissioner Karas said they hope the public would attend the next meeting on February 16, at 6:30 pm with any questions or comments on the matter.

The County Board must vote to place the Jail addition issue on the May Primary ballot by March 1 if the Committee is in a position to make that recommendation by then. The Committee may also opt to recommend other election dates (i.e., the November Election or a Special Election date) or other funding methods, such as the Nickel Tax.

Field and Sheriff Hardesty discussed LB921 recently introduced by Sen. Steve Lathrop. This potential bill, now under consideration in the Nebraska Legislature, LB 921, which, if passed, would require all convictions of Class III or lower felonies with sentences of four years or less to be held in the County facilities where the arrests have been made. If passed, this will significantly impact all County inmate bed projections. Morehead was asked if a typical years’ worth of convictions in this category could be calculated for Richardson County. Also, it has been reasoned that this figure for a single year might rise at the same rate in the next 20 years as have prior Inmate projections.

It was determined that Jail Standards staff Denny Macomber and Bond Counsel Andy Forney (D.A. Davidson) would try to attend the next Committee Meeting.

The meeting was adjourned at approximately 9:00 pm, and the next meeting will be held again in the Courtroom at the Courthouse on February 16, at 6:30 pm. The public is encouraged to attend with any questions, comments or concerns.