The weather was humid but near-perfect this past weekend when The Falls City Hot Air Balloon Festival got underway.

Three thousand tickets were sold to the event, but Chamber Director Amber Holle estimated that the total attendance was nearly 4,000 with sponsors, vendors, volunteers, and children under eight.

Attendees arrived from all over the tri-state area to stake their spot for the spectacular event. While much better than in 2019, the drive from 21st and Fulton Street to Brenner Field (1.4 miles) took an estimated 25 minutes in bumper-to-bumper traffic. But once at the airport, when following the hardworking volunteers’ directions who were giving parking instructions, the parking was a breeze. Balloons were scheduled to lift off at 7:00 p.m., but the Aeronauts opted to wait until the conditions were perfect due to weather conditions.

“There has to be little to no wind,” said Holle.

As the balloons finally lifted and soared over the crowd of thousands, people cheered, clapped and one excited youngster yelled, “Look at the balloon! It’s so close, you can see the people!” as he jumped up and down excitedly.

Later, when the balloons returned, the crowd was treated to a balloon glow to music.

As the night wound down and people tried to leave, a dense cloud of dust hung in the air, making it slightly challenging to see driving back into Falls City. Traffic was slow as some drivers couldn’t see through the fog-like dust that hung in the air.

Sunday morning, the Aeronauts decided to cancel the balloon launch due to storms in the area.

The Jaycees held their annual fly-in breakfast that was still a success.

Chamber Director Amber Holle said that all in all, she was very pleased with how everything went, but there are still some improvements she would like to make in terms of space.

As of now, there are plans to have another Hot Air Balloon Festival next year on Father’s Day Weekend, said Holle. “We always need more volunteers! It takes so much time and energy to pull this off.” 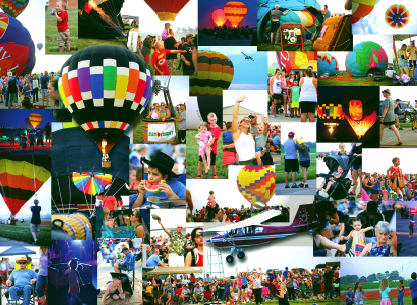