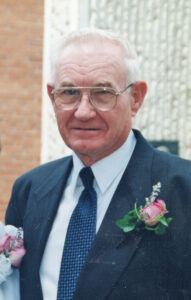 Emmett attended St. Mary’s Catholic School at St. Benedict until his eighth-grade graduation. Following graduation, he worked on the family farm. On August 15, 1954, he entered into active duty with the U.S. Army. He served his country for 24 months in Japan and Korea until being honorably discharged. He returned home, continuing his farming career with his brothers and later nephews until retirement in 2002. He also was generous in helping several nephews start their own farming operations.

Emmett was one of nine individuals who founded the Community National Bank in Seneca, Kansas, in 1984. He served as a faithful director on that board from inception until 1997 and on the Community Bancshares, Inc. board. He also served on the Nemaha County Coop board from 1984-1990.

Emmett was a member of St. Mary’s Church in St. Benedict, Kansas. There he served on the parish council from 1980-1983 during the restoration of the interior of the historic church. Later in life, he was a member of the Saints Peter and Paul Catholic Church in Falls City, Nebraska. He was a lifelong member of the Knights of Columbus. He was a man of faith who enjoyed sharing his time, talent, and treasures with others.

On June 15, 2002, he was united in marriage to Mary Jo Goff of Falls City, Nebraska. At that time, he moved off the farm in Seneca, Kansas, to make his home in Falls City, Nebraska. In his spare time, he enjoyed fishing trips up north, bowling for the Knights of Columbus, hunting, and taking trips traveling to new destinations. He also attended many school activities of his step-grandchildren.

Emmett was preceded in death by his parents, sister, Alice Wehner and her husband Edwin, brothers Cletus, Francis, Cyril and Leroy and brother in law Pat McMahon.

A Mass of Christian Burial will be held on Wednesday, December 16, 2020, at 2:00 p.m. at Sts. Peter and Paul Catholic Church. Interment will be in Falls City Catholic Cemetery. Military graveside honors by Falls City Ceremonial Honor Guard.

The service will be live-streamed on Dorr and Clark Funeral Home’s Facebook page at: https://www.facebook.com/dorrandclarkfuneralhome

A Parish Rosary will be recited one hour prior to the service at Sts. Peter and Paul Catholic Church.

COVID 19 Funeral Guidelines will be implemented with limited spaced seating (25% occupancy), 6 feet of separation between household units and masks required.

In lieu of flowers, the family prefers memorials be made to family choice for later designation.