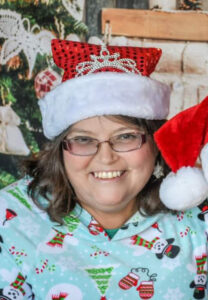 Cynthia Lee Kirkendall, 54 years old of Chattanooga, TN, formally of Falls City NE, passed away on December 9, 2020, in Chattanooga, TN. She was born on April 7, 1966, to Charles Witt and Linda Goodman Witt of Monroe, MI.

In 1991 while working at Fermi Nuclear Power Plant, she met Dennis G Kirkendall of Falls City, NE, while he was on an outage at the plant. They married on February 21, 1997, and then moved to Falls City, NE with their four children, where Dennis G Kirkendall proceeded to raise them as his own. They traveled throughout the United States for work, where they got to see many new places. Upon the children’s graduation, they moved to Penn, PA, in 2007. In 2010, they moved to Chattanooga, TN, where she lived the remainder of her years.

During her life, she enjoyed sewing and making costumes and blankets for her family. She also loved baking and cooking for large family gatherings. Most of all, she loved to spend time and do crafts with her grandchildren and great-grandchild.

Celebration of life is to be held at Prichard Auditorium at 312 W 17th street in Falls City, Nebraska 68355 on December 18, 2020, at 3 pm with the wake to follow. Christmas attire is requested to be worn. Names and numbers are required upon entry due to Covid 19 Pandemic. Masks will also be required upon entry to the facilities. A paper mask will be available if needed.

All memorials will be distributed to the family after the service. Any Donations can be made to the Diabetes Awareness Fund.