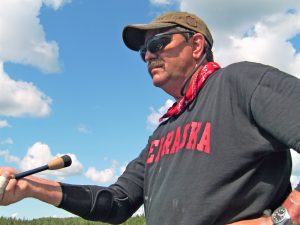 Steven Mayfield, 71, of Syracuse, passed away peacefully on October 13th, 2022, with his family by his side.

Steven was born to the late Bob and LaVerne Mayfield, April 25th, 1951, in Louisville, Nebraska. Steven grew up on the family farm near Nemaha. He initially attended Nemaha High School before transferring to Southeast Nebraska Consolidated in Stella and graduating in 1969. Steve was involved in many activities in his youth, including sports, 4-H, and band. He ultimately received his Master of Science degree from Northwest Missouri State University in Animal Science, continuing his passion for animal care that he developed growing up on the family farm.

Steven married Peggy Rohlfs in 1977, and they lived together at various locations, including farmland near his father and mother by Nemaha, before ultimately relocating to Peggy’s hometown of Syracuse in 2013. Steven is survived by his brothers John, Bob and his wife Carol, Ron and his wife Pam, Vern and his wife Pam, and his two sons Caleb and Nathan. He was predeceased by his parents Bob and LaVerne, his wife Peggy, his sister-in-law Sheila Mayfield, and father and mother-in-law Dick and Evelyn Rohlfs.

He continued his passion for music by playing drums with his close friends in the Cadillac Cowboys band. After his days playing in a band were over he enjoyed playing drums for local church groups. He was an avid fast pitch softball player, playing at Northwest Missouri State and then in various leagues afterwards. In his later years Steve loved to go on an annual fishing trip in the Canadian wilderness with his brothers. He was proud of charitable work he did for youth in Costa Rica. Steven was an avid conversationalist and enjoyed discussing any topic with any person. He was gregarious and kindhearted and found friendship everywhere he went.

A memorial celebration will be Friday, November 11, 5:00 p.m. at the American Legion Building in Auburn.  Burial of ashes will take place later at Park Hill Cemetery at Syracuse.

Memorials in lieu of flowers are suggested to the Lustgarten Foundation or Children With Hair Loss.

Services are entrusted to Hemmingsen Funeral Home of Auburn.