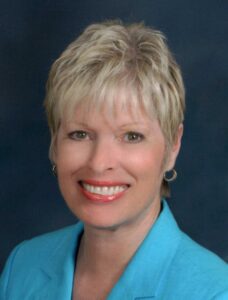 Victoria “Vicki” Ann Hedlund passed away into the loving arms of Jesus Christ on August 25, 2020. She was born on February 14, 1945, to Reuben and Dorothy Metzger in Omaha, Nebraska. They moved to Falls City, Nebraska, soon after. She graduated from Falls City High in 1963. Vicki attended the University of Nebraska and was a member of Chi Omega sorority. She received both her BS. and M.Ed. Degrees. Vicki was a lifelong Husker fan. She taught grade school for eight years in Nebraska and then moved to Shawnee Mission, where she taught at Oak Park and Oak Park Carpenter. She retired in 2013 after 46 years of teaching.
Vicki married Larry Hedlund on July 7, 2001. They enjoyed traveling and spending time with their grandchildren. They also liked making friends by sponsoring foreign officers attending the Command and General Staff College at Fort Leavenworth. Vicki loved the people she met over the 15 years she spent working her part-time job at Talbots. She also spent time as a volunteer at Christ Church Anglican, where she most recently served as a member of the altar guild, greeter, and liturgical assistant.
She leaves her husband Larry, stepdaughters Stacy Harper (Patrick) Kyra, Logan, and Bryson, Kristin Hedlund (Ryan Lardenois) Rory, and Dylan, and her brother John (Jean) Metzger.
Vicki’s body has been cremated and her ashes will be interred, after services, in the garden at Christ Church. A memorial service celebrating her life will be held at Christ Church on a future date.
Please make any memorial donations to Christ Church Anglican (designate Altar Guild), 5500 W 91st St, Overland Park, KS 66207 or Little White Dog Rescue, 7312 Frederick Circle, La Vista, NE 68128.