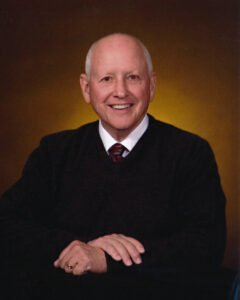 On September 28, 2020, Gerald B. Owens, loving husband, father, grandfather and friend, passed away at the age of 76. Jerry was born on November 24, 1943, in Falls City, NE to Roland and Marie (Miller) Owens and was the second of three children.  Jerry married Beverly Armstrong in Lincoln, NE, on May 25, 1968, and they raised four children.

Jerry grew up on a farm near Verdon, NE. He graduated from Dawson-Verdon High School as valedictorian.  He attended Stanford University, University of Nebraska Lincoln and studied abroad in Germany.  He graduated from UNL with honors with a degree in Education with majors in mathematics and German.  Jerry was a member of Farmhouse Fraternity, was a cheerleader at UNL and joined the Army ROTC.

Jerry and Beverly moved to Italy in 1968, where he served as an Army Captain.  They returned to Verdon in 1972, where he helped manage the family farm with his father for fourteen years.

In 1986 he opened the first Edward Jones office in Seward. He was proud to recall knocking on every door in Seward county to meet future clients and build his business. Jerry was well-suited for the work, combining genuine care for people and a knowledge of numbers and finance.

He was a member St. Vincent de Paul Catholic Church, the Knights of Columbus, served as president of the Seward Rotary Club, and was an active Ambassador of the Seward Area of the Chamber.

Jerry was a cheerful and loving person who quickly developed a bond with every person he met. His children would joke that he never met a stranger. He was a talented linguist who was, at times, mistaken for an Italian, German and Spanish native speaker. He was able to use self-taught Spanish skills to help members of the community. Jerry’s zest for life was fueled by many adventures: biking, hiking, scuba diving, travel and a few shenanigans along the way.

Jerry was preceded in death by his parents, brother Byron Owens, sister Mary Kay Portrey, and granddaughter Zoey May Owens.

He is survived by his wife, Bev, children, and spouses: Stephanie and Yuri Yulaev, David and Jill Owens, Dan and Kim Owens and John and Julie Owens, as well as ten grandchildren: Nikolai and Olivia Yulaev; Oli-ver, Foster, Mercer and Miller Owens; Arianna and Jonathan Owens; Sadie and Jack Owens.

A memorial service was held at 10:30 a.m. on Monday, October 5, 2020, at St. Vincent de Paul Catholic Church in Seward. Monsignor Robert Tucker will be celebrating the Mass.