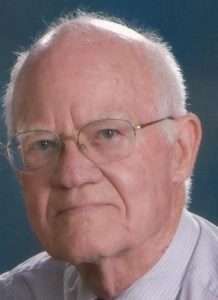 Robert Louis Heins, MD, age 94, of Lincoln, Nebraska, died on March 8, 2019.  He was born on June 7, 1924, in Chappell, NE to Reverend John Heins and Helen (Kastner) Heins. He was confirmed at Immanuel Lutheran Church in Lincoln, Nebraska in 1938.  After graduating from Lincoln High School in 1942, Dr. Heins attended the University of Nebraska in Lincoln.

His stay there was cut short by the Second World War. He was drafted into the military at age 19 in December 1943. After basic training, he was sent to Chicago to study Chinese. Then it was on to Europe and 178 straight days of combat.  Included during this span was his participation in the Battle of the Bulge.  Dr. Heins received a Bronze Star, and his 104th Infantry Division was awarded the Presidential Unit Citation. He was discharged in April of 1946.

Dr. Heins resumed his undergraduate studies after returning home to the University of Nebraska in Lincoln.  In 1951 he was accepted at the University of Nebraska Medical Center in Omaha to study medicine.  It was during this time that he met his future bride, Janice Doering, who was studying to become a nurse.  December 27, 1953, was the first day of their marriage which lasted 57 years.

After interning in Kansas City, Missouri, the new couple moved to Tilden, Nebraska where Dr. Heins began his first medical practice.  After a short stop in Alta, Iowa, a move to Falls City, Nebraska followed.  There he practiced for 11 years.  He delivered over 600 babies and brought comfort and care to all of his patients.  He bought a farm in the Barada Hills, outside of Falls City.  The time he spent there brought him much needed relaxation and peace. He also enjoyed a game of golf whenever he was able to do so.

In 1969, Dr. Heins moved his family to Lincoln where he began work in the Emergency Room at Lincoln General Hospital.  After two years there, he completed a residency program in psychiatry at the University of Nebraska Medical Center in Omaha.

He then worked as a psychiatrist for seven years at the University of Nebraska Student Health Center in Lincoln, followed by 12 years at the Veterans Hospital, also in Lincoln.  He retired in 1993.

After retirement, Bob and Jan enjoyed traveling together with family visits being a priority.  They were also able to spend more time giving service to Good Shepherd Lutheran Church in Lincoln and were greatly rewarded by the spiritual nourishment they received in return.  Daughter Mary and family lovingly provided his late-in-life care in Longmont, Colorado, and his daughter Kathy and family in Kansas. Son Bob was always available for support.

Dr. Heins was a loving husband, father, brother, son, and grandfather. We will miss him dearly for his sense of humor, generous spirit, the wisdom he imparted and his love. He always attempted to do the right thing, guided by his service to God. He had the rare union of the brightest gifts of intellect and the heart. He is now at peace in the loving arms of God his Father and reunited in heaven with all of the people he loves.

Visitation is scheduled for Friday, March 15, from 5 – 7 pm at Lincoln Memorial Funeral Home. A funeral service will be held on Saturday, March 16, at 11 am, at Good Shepherd Lutheran Church, Lincoln, Nebraska. This will be followed by a committal service at the graveside at Lincoln Memorial Cemetery. All are invited to return to the church for a luncheon. The family has chosen to honor Dr. Heins through a memorial window at Good Shepherd Lutheran Church.