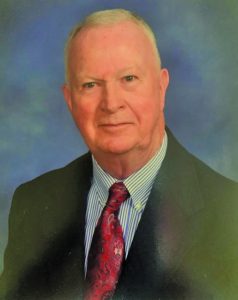 Dennis L. Swenson, 83, passed away at his residence in Pasadena, Texas, on Sept. 16, 2022, after a short illness.  Mr. Swenson was born in Ft. Dodge, Iowa, Aug 12, 1939, to Harry A Swenson and Eileen M Nolan.  At age three, the family moved from Iowa to Falls City, NE.  Mr. Swenson later graduated as Salutatorian from Sacred Heart Catholic School in 1957 and entered St. Benedict’s College Seminary, Atchison, KS.  He later transferred to Loras College, Dubuque, Iowa, where he played football until the program was dropped.  He then attended the University of Arizona, Tucson, on a football scholarship, finally graduating from St. Benedict’s in 1963.

Mr. Swenson’s first teaching/coaching job was at St. Joseph’s School, Beatrice, NE.  There, he met his future wife, Victoria J. Narancic.  The couple married at St. Joseph’s Catholic Church on Feb. 27, 1965, the last high Mass before the Catholic Church changed from Latin to English.  In 1966, the couple moved to Beaumont, TX for a coaching/teaching position at Msgr. Kelly High School, Beaumont, TX.  Their first-born son, Sean, was born there, but died six months later on Feb. 27, 1967.  They then moved to Carroll, IA for a coaching job at Keumper H.S. for one year.  In 1968, Mr. Swenson took a position at Central Michigan University, Mt. Pleasant, MI, where Mr. Swenson coached football for 10 years and became an Assistant Professor in the Health-Physical Education Dept.

In 1974, Coach Swenson was part of the coaching staff at CMU that won the Division II National Football championship.  His football players called him “a player’s coach”–Tough but fair, bringing out the best qualities in each player.  They were still in contact with him after nearly 50 years.

While in Michigan, three more sons were born:  Timothy, Mark, and Anthony.  In 1978, Mr. Swenson left college coaching and moved his family to Austin, Texas, for a coaching position at Lanier High School.  After seven years, the family moved to San Antonio for coaching positions at East Central H.S. and Madison H.S.

From 1991 until his retirement in 2003, Mr. Swenson was the head football coach and Athletic Director at Sam Rayburn H.S. in Pasadena.  Coach Swenson oftentimes said he had the greatest job in the world—coaching–because he felt like ‘he never worked a day in his life.’

After coaching and teaching for 40 years, Mr. Swenson and his wife traveled the world.  His hobbies were playing cards, working out, golfing, and reading profusely.

A devout Catholic, Mr. Swenson was a lector, Eucharistic minister, and choir member.  In 2008, he was instituted as an acolyte.

Rosary and visitation will be Friday, Sept. 23, 5-7 p.m, at St. Mary of the Immaculate Conception Catholic Church, La Porte.  The funeral will be at the same location on Saturday, Sept. 24, 9:30 am, Fr. Tony Castro officiating.  Interment will be in the Falls City Catholic Cemetery in Nebraska later in October.

The family suggests donations in lieu of flowers be made to St. Vincent de Paul Society, Catholic Charities, the Catholic Relief Fund, or a charity of your choice.