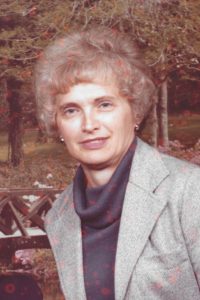 Virginia Mae (Frerichs) Gerdes, 88, formerly of rural Auburn, Nebraska was born on December 25, 1933, in rural Auburn, Nebraska to Elmer and Mildred (Harpham) Frerichs.  She was raised on the family farm and attended Lampe District #79 country school in Nemaha County through the 8th grade.  Virginia then attended Bratton Union Consolidated High School where she graduated with the class of 1951.  On March 17, 1952, Virginia was united in marriage to Milburn Gerdes in Council Bluffs, Iowa.  To this union two sons, Barry and Clayton were born.  The couple raised their boys near and on the family farm where Virginia was born in Nemaha County.  Virginia truly loved living and working on the farm with her best friend and husband Milburn.  She worked as a medical secretary in Auburn for 35 years and drove school bus for Southeast Consolidated Schools for many years, but being a farmer’s wife always came first.  In 2005, Virginia began working as a funeral assistant at the Hall Funeral Chapel and worked there for many years until her health started to decline.  She was a lifetime and dedicated member of St. John’s (Stone) Lutheran Church in rural Auburn.  In her spare time, Virginia enjoyed working on the farm with her husband, camping and spending time with her family and friends.

Virginia went to be with her Lord on Wednesday, August 31, 2022, at the Colonial Acres Nursing Home in Humboldt, Nebraska having reached the earthly age of eighty-eight years, eight months and six days.  She was preceded in death by her parents, husband Milburn, son Barry and brother-in-law Ted Whitfield.

Memorial Services will be held at 10:30 a.m. on Thursday, September 8, 2022 at the Hall Funeral Chapel, 707 15th Street in Auburn, Nebraska with Pastor Bill Shaner officiating.

Visitation will be held from 9 a.m.-8 p.m. on Wednesday, September 7, 2022, at the Hall Funeral Chapel in Auburn with family greeting friends from 5-7 p.m.

Inurnment will immediately follow services at the St. John’s (Stone) Cemetery in rural Auburn, Nebraska followed by a luncheon at the church.