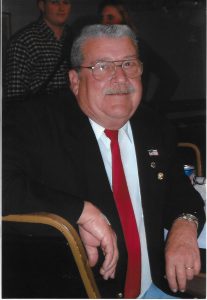 Richard “Dick” Dean Arington, 91, of Humboldt, Nebraska was born on April 15, 1931 in Falls City, Nebraska to Hugh and Veronica (McCreery) Arington.  His family lived in many different homes in Richardson County, Nebraska, Brown County Kansas and for a period of time on a ranch outside of Denver, Colorado.  Dick graduated from Dawson Public School in 1949 and when the Korean war broke out, he joined the navy and did two tours of duty in Korea on the USS Point Cruz. After being discharged, Dick went back home to try his hand at farming, but between the hail and the draught, one year of that was enough.  In 1956, Dick began college and by 1959 had earned enough graduate hours to take a position as Superintendent of Schools at Nemaha. From there, he went on the hold the position of Superintendent of Schools at Bratton Union Consolidated.  In those days, being Superintendent of Schools entitled more than just running the school.  He also taught all of the business classes, some social studies, as well as coaching the basketball and volleyball teams.

On May 26, 1956, Dick was united in marriage to Norma Fairbanks at St. Mary’s Catholic Church in Dawson, Nebraska. To this union 5 children, Bill, Annie, Peggy, John and Marg were born.  In 1963, Dick and Norma moved to Humboldt where for 25 years they owned and operated “Dick’s Tavern” on the east side of the square.  This is where Dick became well known to many by the name of “Big Daddy.” After he and Norma closed Dick’s Tavern (known to the family as just “The Tavern”) in 1988, he held the position of Richardson County Veterans Service Officer for 8 years, retiring in 1996.

Dick spent 25 years on the Richardson County Fair Parade Committee, 23 of those years as co-chairman. He belonged to the Humboldt Fire Department for 25 years and was fire chief for eight years, was a founding member of the Humboldt Rescue Squad where he served for 15 years and was on the school board for 8 years.  Dick served as President of the School Board, Fire Chief and Commander of the American Legion all in one year. He had 61 consecutive years membership in the American Legion where he held positions of: Post Adjutant, Post Finance Officer, Post Chaplain, Post Commander (several times), Richardson County Commander, District 13 Vice Commander, District 13 Commander and Area District Commander.  In 1974, Dick received the Cody Kerr Award which is awarded to the most outstanding Nebraska Legionnaire.  Other services and organizations Dick belonged to were the VFW and the 40&8.  He served 21 years on the Humboldt Library Board, 6 of those years as chairman and with the help of a very good library board, they added the West Reading Room, of which he was very proud.  Dick was a member of St. Mary’s Catholic Church, where he was on the church council and was a member of the Knights of Columbus serving as Past Great Knight.

He and Norma enjoyed traveling, having traveled to all 50 states. They enjoyed many years of being able to travel to different locations for his “Ship Reunions” with his friends and fellow navy buddies from his years on the USS Point Cruz.

Dick passed away peacefully at Stormont Vail Hospital in Topeka, Kansas in the early morning hours of Friday, September 2, 2022, having reached the earthly age of 91 years, 3 months and 18 days. He will be remembered as an honest, hardworking man who was well respected by all who knew him and for his honest easy smile that was given so freely to those around him.

Funeral Mass will be held at 10:30 a.m. on Friday, September 9, 2022, at St. Mary’s Catholic Church in Dawson, Nebraska with Father Kenneth Hoesing officiating.

Visitation will be from 9 a.m.-5 p.m. on Thursday, September 8, 2022 at the Wherry Mortuary in Humboldt, Nebraska.  A rosary will be recited at 7 p.m. by Father Hoesing at St. Mary’s Catholic Church in Dawson, Nebraska.

Interment will be at 1:00 p.m. on Friday, September 9, 2022, at the Humboldt Cemetery with full military honors conducted by the Nebraska Naval Funeral Honor Guard and the Harvey-Mann Legion Post #269.

Memorial contributions may be given the Bruun Memorial Library Fund or St. Mary’s Catholic Church.