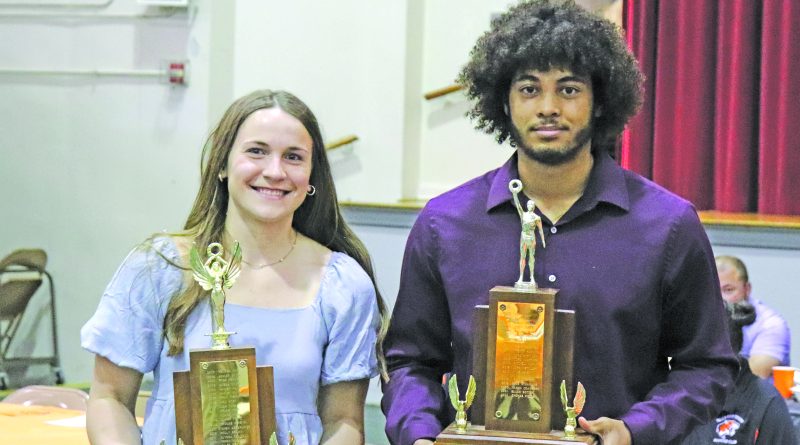 On Sunday, May 1, 2022, the Falls City Tiger Booster Club hosted the annual Athletic Awards Night at Prichard Auditorium. Robbie Craig, Booster Club president, opened the evening with a quick welcome, followed by a check presentation from Trent Scheitel and Kevin Malone, representing Frontier Bank to the Falls City schools for $3,763.00 from the Scores School Support program.

After the check presentation, Athletic Director Don Hogue handed out two distinguished service awards. The first award went to Kim Vrtiska for all his years of announcing for volleyball and basketball games and helping in the press box at home football games. The second award was given to Mark Hodge, who had volunteered to help with the chain gang on the sidelines of football games for 31 years.

Coaches Quentin Coatney and Don Hogue announced the Lifter of the Year awards, with Chase Nolte and Stiephan Fields winning.

Principal Gale Dunkhas took the podium and thanked everyone in attendance and everyone who has supported Tiger athletics. Next, he thanked Coach Don Hogue for his 23 years of service to the Tiger basketball program. Hogue retired this year as the winningest basketball coach in Tiger history. Dunkhas also thanked assistant coach Jason Bredemeier who is also hanging it up after 21 years.