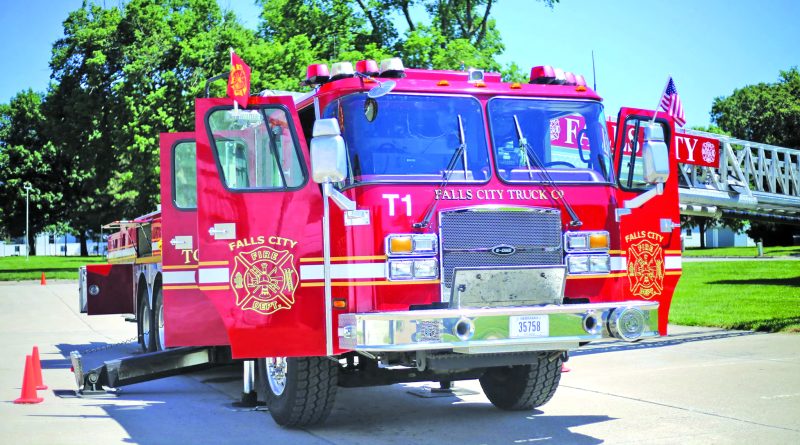 Fireman Jon McQueen had been in contact with Mrs. Morehead about trying to help upgrade their recent purchase of Tower 1, a 95’ platform truck from Burlington, VT., to install LED lights.

When first purchased, the fire truck was put into service in April. During a pre-inspection, it was suggested that the Department should look to do an upgrade with all the advanced technology of LED lights if purchased.

The 2003 truck has over 125 lights. The Department has been pushing to replace all emergency and white scene lights to relieve the strain on its electrical system and generator using the current quartz/halogen lights.

McQueen had contacted three companies in February and the cost was between $25,000.00 and up to $50,000.00. This wouldn’t replace all 125 lights, but it would replace the most important ones, including all the light bars, front and rear warning lights, four (4) telescoping white scent lights, and the buckets spot/floodlights. McQueen stated that some of the lights are broken and don’t work, and it seemed to be more cost-effective to do an upgrade now as the truck is the newest for Falls City and most likely be in service for the next (16) years.

The fire truck, when purchased new by Burlington Fire Department, was $800,000.00 and the City of Falls City’s investment today is just over $90,000.00, including its inspection, purchase, shipping, tires, training, repairs, and ladder inspections.

Amalia, who is from Burlington VT, stated in her card to Jon that she has always had a “soft spot in her heart for the fire department and the police” for the dangerous work they perform. This was her appreciation and hope others would contribute too.

The Fire Department, in December, filed papers to become a 501 (c) (3) Non -Profit Volunteer Fire Company would accept more donations as they try to reach their goal of $30,000.00 for the work to be performed in Falls City rather than taking it back to their facility from a company in Omaha who specializes in upgrades for all emergency vehicles and with the quotes received back in February and some increases and surcharges on parts, including trip charges they hope to schedule and start the upgrade in March 2022.

Should you wish to donate, please make out your checks and mail them to the Falls City Volunteer Fire Department 2207 Barada St. Falls City, NE 68355 and they will return an acknowledgment letter for the year 2022 tax purposes.

It’s requested that all citizens continue to support our local businesses for allowing their employees, who are first responders, to be able to leave their work and volunteer to answer the call.