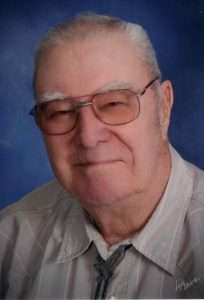 Tom enlisted in the United States Navy on May 17, 1950 at Kansas City, MO. He served on the USS Princeton. He earned a Japanese Occupation Medal, United Nations Medal, Korean Service Medal, National Defense Medal and Good Conduct Medal. He was honorably discharged on February 26, 1954 at Seattle, WA.

Tom was raised in Salem and graduated Salem High School in 1948. Following school he worked as a bell hop for The Stephenson Hotel. He then enlisted in the U.S. Navy. Upon his discharge he returned to the area worked for Philips 66 as a gas station attendant. He then attended Ag School on the G. I. Bill at Shubert and started farming with his father. He farmed and had a dairy, eventually working part time for the Nemaha NRD and then became full time with the soil conservation service, retiring after 15 plus years. He was also a part time carpenter.

He enjoyed fishing at the family lake and caught a 40 pound Rock Bass. He also liked camping, country and blue grass music, taking his grandkids on rabbit patrol, trees and planting trees, winning the 1994 outstanding tree planter award. He was a member of St. Peter’s Lutheran Church, past president and honorary member of Falls City Rotary Club, Nebraska Nut Growers Association and a 2 term NRD board Member.

The body of Mr. White has been cremated and a memorial service will be held on May 28, 2021 at 2:00 PM at St. Peter’s Lutheran Church with Pastor Mike Hader officiating. Military honors by Falls City Ceremonial Honor Guard.