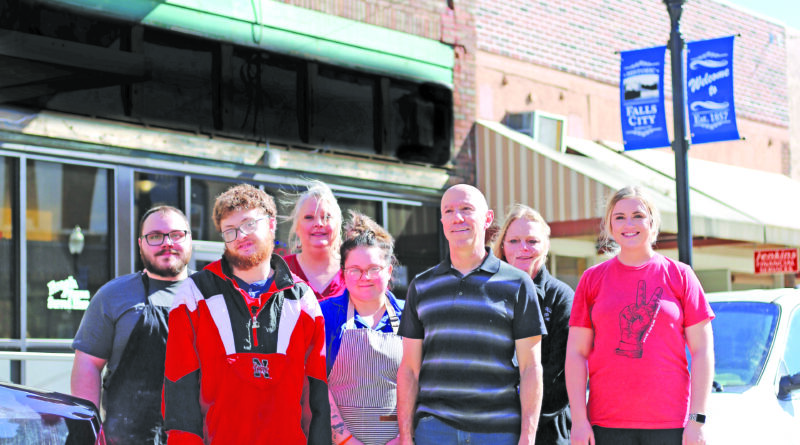 This is part one of an ongoing series about the COVID-19 Pandemic: One Year Later and how it affected Richardson County residents.

There were rumblings of coronavirus that were starting to make their way around the United States and worries were starting to rise. Locally both Sacred Heart girls and boys basketball teams were playing in Lincoln for that coveted state title. The girls played to a packed house of their friends and family, while only a week later, the boys played to an empty arena.

On March 13, 2020, Nebraska Governor Pete Ricketts issued an Emergency Declaration for COVID-19. A 10 person limit on gathers was to be observed and other measured taken for social distancing as recommended by the Center for Disease Control.

Most organizations, businesses, bars, and restaurants within the City of Falls City’s corporate limits voluntarily implemented the recommendation of the CDC, including A&G Restaurant, a Falls City staple, for over 25 years.

Owners  Costas and LeeAnn Haralabidis found themselves in a position they never anticipated, their restaurant dining room was closed with little warning and the future was in question each day.

They weren’t alone; several states all over the nation closed down the dining rooms of their restaurants and bars, with many never recovering.

“In the beginning, it was kind of shocking like everyone that this thing was coming. No one told us to close the dining room. The community was closing. The banks, the shops. So we decided, everyone is doing this-we will too,” said Costas. “Unless everyone in the community doesn’t take the same action, it doesn’t help. If one business is open, you know, we wanted to move like the community, so we closed the dining room for about six weeks and we did to go only. That was pretty intense. The community decided this won’t stop us from eating-from ordering out.”

Costas said A&G Restaurant did a lot of to-go orders in those six weeks. “People were very nice; they did well, they were understanding.”

Sometimes Costas and his staff would get behind on orders, especially on the weekends, working with masks. “After five o’clock, everyone wanted to order out. There was nothing else to do, you know? Like you couldn’t go to St. Joe or shopping in Lincoln. Everyone was staying at home, so I guess the only entertainment was the TV and eating out or ordering out, rather.”

Hardworking employees played a big part in keeping the restaurant running smoothly as the community ordered out.

“We are also very thankful for our employees that stuck with us throughout this and worked hard and helped us. Besides our full-time employees, which at that time there were six of them that stayed working. At the time, the dining room closed a few servers that didn’t work those six weeks. After that, they came back.”

As the year went on and the world continued to stay shut down, the community stuck with them. A&G opened their dining room at the beginning of May with fewer tables.

“Some of the older crowd who are cautious we haven’t seen for a year are slowly now starting to come back and dine-in because they were worried,” said Costas. “There are others; they are like, we take the precautions, the mask but, it should not stop us from living our lives.”

The staff continues to wear a mask at all times. Haralabidis has made other changes due to the pandemic taking some of the dining room tables out to make more space between patrons, keeping distance with customers, and paying attention to deep cleaning.

“We’re really happy that we live in a community like Falls City and we’re able to continue working. The community is great. The local businesses are doing a good job with what we have on our hands.”

“I think compared to the rest of the county; we opened fairly early. The schools are still open; I think it was a good decision to open the schools, to play a little sports all of that. In big cities, the restaurants are not allowed to open or operate that’s terrible. I understand why they do it. There’s a lot of people there, cases are still high, so they had to close the dining rooms, but I think we are fortunate we are in Nebraska.”