Bonnie Rose West, 82, of Falls City, Nebraska was born on June 4, 1938, in Madera, California to Walter and Bernice (Witt) Ploof.  She spent her childhood years 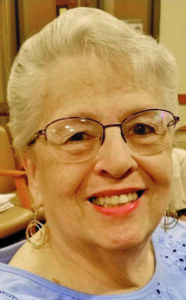 with her family in Onawa, Iowa where she attended school and graduated from Onawa High School.  On May 3, 1959, Bonnie was united in marriage to Royal “Gene” West in Morrill, Kansas.  To this union two children, Larry and Kala, were born.  The couple raised their family in Falls City where Bonnie worked various jobs.  She sold Stanley products for many years with the help of her two children whether they wanted to or not and her most recent employment was working as the social service director for the Ketter Manor in Falls City.  Bonnie was a member of the First Brethren Church in Falls City, the Falls City American Legion Auxiliary and served as an EMT on the Falls City Volunteer Squad for five years.

Bonnie passed away on Sunday, March 14, 2021, at her home in Falls City, Nebraska having reached the earthly age of 82 years, 9 months and 10 days.  She was preceded in death by her parents, husband Royal “Gene” West and brothers-in-law Walter Hanks and Gordon Zaiser.

Visitation will be from 9 a.m.-8 p.m. on Thursday, March 18, 2021, at the Hall Funeral Home, 2403 Harlan Street in Falls City, Nebraska.  Family will greet friends from 6-8 p.m. at the funeral home where masks are requested for those attending.