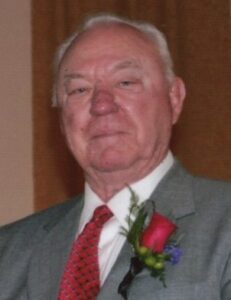 Robert was raised on a farm at Spearville and graduated in 1951 from Spearville High School. He then attended St. Mary’s of the Plains College for two years and then enrolled in Kansas University. He was a 1960 graduate of Creighton Medical School in Omaha. He practiced medicine for a year in Falls City before enlisting in the Air Force, serving two years in England at Bentwaters R. A. F. Following his discharged he returned to Falls City continued his practice until his retirement in 1998. He was an avid sportsman and a member of Sts. Peter and Paul Catholic Church, Falls City Elks Lodge, Knights of Columbus and the VFW.

A Mass of Christian Burial will be held on Thursday, February 25, 2021 at 2:00 PM at Sts. Peter and Paul Catholic Church with Father Lawrence Stoley as the presiding priest. Interment will be in Falls City Catholic Cemetery. Military graveside honors by Falls City Ceremonial Honor Guard.

A Parish Rosary will be recited 1 hour before service time at Sts. Peter and Paul Catholic Church.