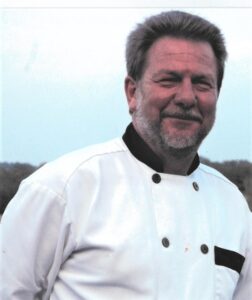 Steven D. Roberts (Beef), 67, of Hiawatha, died Saturday, December 26, 2020, in Hiawatha, KS.   He was born November 1, 1953, in Marysville, KS, the son of Jim and Cleta Patton Roberts. He was baptized at a young age of the Baptist faith. He graduated from Marysville High School in 1971, where he participated in football and wrestling.  You could also find Steve singing in the church and school choir.  In high school, he worked at Stanton’s Hardware, Marysville, to pay for his 64 Chevy. Steve attended Missouri Western College.  In 1973 he married his high school sweetheart Marlys Tjaden.  They were together for 42 years.  He began working at Heidman’s Locker in Seneca, KS, in 1973, leading to a lifelong career in meat cutting.  In 1975 they moved to Hiawatha, where Steve went to work for Johnson’s Locker.  Also, in 1975 a daughter Alicia was born, followed by a son Philip in 1978.  In the early 80’s Steve went to work at Lindy’s Thriftway and worked there until they leased Cottonwood Meadows.  During his time at Lindy’s, Steve showed his entrepreneurial spirit by owning Roberts’ Retail Liquor, joining his longtime coworker in CR Rentals, catering with his family out of the home, and along with his parents owning Daylight Donuts, Marysville.  His final business endeavor was The Country Cabin, his lifelong dream, which he owned and operated until his untimely death.

He served as a Brown County Commissioner for 20 years; highlights of his years on the commission were construction of the law enforcement center, new windows in the Brown County Courthouse, and the Rulo, Nebraska Bridge.  He was a member of Quails Unlimited, Bakers’ Dozen Investment Club, which they enjoyed many vacations over the years, 1st United Methodist Church, Hiawatha, Thursday night golf league, and the singing group the “Unprofessionals.”

Over the years, he enjoyed vacations at the Ozarks with his family and friends, hunting with his brother and friends, jogging, riding horses, Colorado skiing, coaching softball, grilling with his neighbors, KU watch parties, following his children’s sporting events, raising Brittany pups, and the guy loved to dance.

He is survived by his daughter Alicia (Damian) Deters and their two sons Cole and Bentin of Baileyville, KS son Philip (Sara Steward) and their children Cecilia and Houston, Rancho Cucamonga, CA, Marlys of Marysville, KS,  brother Jim (Joan) Kansas City, Mo, in-laws, and many nieces and nephews.  Also, surviving are all his past and present employees of The Cabin, that he considered his kids and family, and his best friends, you know who you are.

He is preceded in death by his parents Jim and Cleta Roberts, his in-laws Vern and Leona Tjaden, his sister Judy Roberts Wilson and his brother-in-law Tom, and many of his loyal Brittany pups.

He delighted in visiting and serving his customers for over 25 years.  All the guy wanted to do was cut steaks, serve his customers, and see them smile.  In the words of Steve

“It is what it is” and “Everybody has someplace to be”

Please remember the family during this critical time by sending a card or note of remembrance to www.chapeloaksfuneralhome.com