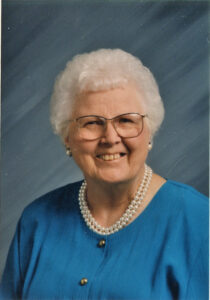 Mary Louise Baudendistel, Age 98, passed away peacefully in her sleep December 4, 2020.  She was born July 4th, 1922 in Dodgeville, WI.  Mary was adopted as infant.

She was raised in Rulo, Nebraska by her parents Ira and Nelly (Frederick) Adams. In 1941 Mary married the love of her life, Herman K. Baudendistel.  They had two children, Theresa and Kenny.  After WWII the family moved to Nebraska City and then Omaha, NE where they lived the rest of their lives.