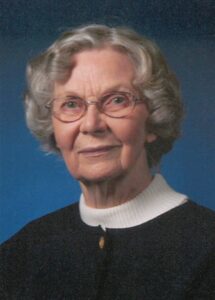 Margaret “Pauline” Hart passed away peacefully in her Longmont home on Saturday, November 7, 2020. She was 100 years old.

Margaret Pauline (Hankins) Hart was born in Fairfax, MO, to Vern L. Hankins and Irene (Settles) Hankins on December 12, 1919. Pauline was a young child when her parents moved to a small farm near Verdon, NE, where she enjoyed the farm life, especially riding her horses. She graduated from high school in Verdon, NE, and completed Business College in St. Joe, MO. She moved to Falls City, NE, where she worked at the Richardson County Bank as the bank’s bookkeeper until her marriage in 1944 to Second Lieutenant Glen E. Hart. Glen was a war hero who had just returned as a fighter pilot from combat duty in the South Pacific. The couple lived on various Army Air Bases in the U.S. until the end of World War II. They moved to Falls City, NE for a few years to be near family while their two daughters were born. In the early 1950s, they moved to Longmont, CO. Glen and Pauline lived in the house that they built for the rest of their lives, as they wished to do.

Pauline enjoyed being a wonderful wife, homemaker, mother, and grandmother. She enjoyed working with children and teaching Sunday School. She was a life member of the United Church of Christ in Longmont, CO. Church life was especially important to Pauline. She looked forward to church activities, especially the Annual Home Tour. She was also a 4-H Leader for ten years. Pauline was a cooking and sewing instructor. She loved preparing for the Boulder County Fair. Pauline enjoyed needlepoint and sewing in her free time and made numerous articles of clothing for her family. She taught her five granddaughters how to embroider when they were incredibly young. Later in life, she worked as an optical assistant and bookkeeper for Barnes and Schwartz in Longmont, CO. Pauline and Glen enjoyed hiking in the mountains, traveling, taking cruise trips, and playing pinochle with their lifelong friends. They also enjoyed square dancing with the Red Rock Ramblers.

A private funeral service was held in Pauline’s honor on Thursday, November 12, 2020, at United Church of Christ in Longmont, CO, after which she was laid to rest with her loving husband Glen, at Foothills Gardens of Memory. Please visit www.ahlbergfuneralchapel.com to leave a message for the family.