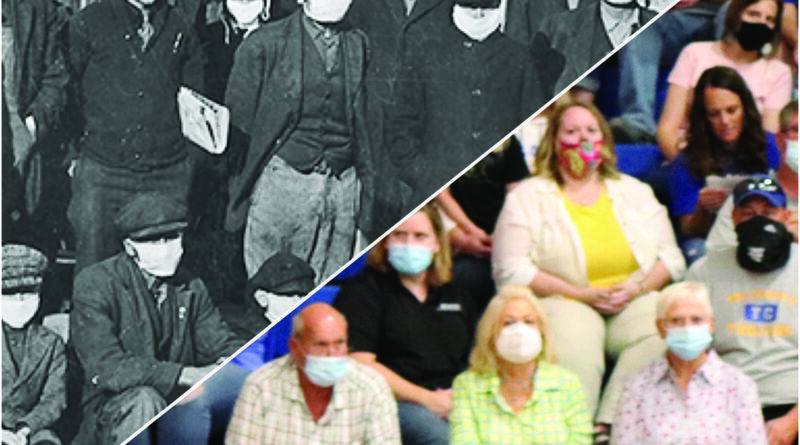 This article is the eighth and final in a series about the 1918 “Spanish Flu,” epidemic that killed millions worldwide.

The second wave of the “Spanish Flu Pandemic” hit our area hard. Each day local papers listed names of those who perished from influenza caused by the flu. Some cases wiped out entire families, while others took young parents and older grandparents. Here are some of those lost during the second wave.

In the wake of the terrible epidemic passing through the county comes sadness and sorrow to many homes, often where least expected. In the past few days, the blow has fallen in several homes in our city, death taking a tribute among some of our most prominent families. The heartaches are many and there is a general sadness among our people. We would comfort the sorrowing while we feel the call may come soon to our own. Anxiety and sympathy go hand in hand and the friend you comforted yesterday may share your sorrow today.

During the influenza epidemic in Falls City, Mr. and Mrs. J.W. Wing parted with two of their children and a brother, Harvey Thompson and wife, with one of their little flock, which is a heavy toll.

Chas R. Goolsby, died at his parent’s home northeast of Barada, December 17, 1918, from influenza. The deceased was 29 years old.

Rex Oliver, well known in this city, son of Prof. Oliver, formerly county superintendent, died at Goodman, MO, a victim of influenza. Announcement of his death was sent to Miss Blanche Kapp of this city. The deceased had many friends in this city who will be surprised and pained to learn of his untimely death.

Joe Miller, of Nebraska City said his grandfather Valentine Edward Miller died of influenza at the age of 31. He was a successful auctioneer of cattle and thoroughbred horses. He lived in Corning, Iowa and became ill in Sioux City. The doctor informed his wife he was over the worst of it, so she and her sister went by train to see him returning the same evening. The next morning they were informed of his passing. Joe’s father, Ed Miller, formerly of Falls City was only three years old at the time.

Richard Mayo, 36,  died Friday morning, January 10, 1919, at Reynolds Restarium from complications resulting from influenza. He was a native of Missouri. Mr. Mayo had been in Falls City for about two months having come to take employment at Colglaziers Grocery. Mr. Colglazer and other friends gave him the best care possible until his relatives arrived. They have the sympathy of the community in their bereavement.

Roy Arthur Lynch, 35, died as his home 1009 Barada St., Sunday, November 24, 1918, of influenza. He leaves a wife and three children who are bedfast with the same disease. Mr. Lunch was a farmer and came here from Liberty, Nebraska.

Alice Wolfe was born on September 16, 1891, and died at her home north of Stella on November 25, 1918, at 27 years old. Her marriage to Harry Curtis was nine years the 14th of this month. Two children were born to them, Roberta, age eight and John Clinton, aged five. Mr. Curtis was taken sick with influenza on November 18. His wife and children then became sick. On Thursday, husband and wife alternated being up and down, giving medicine and waiting on the little family, and from then, Mr. Curtis continued to improve while his wife grew worse. Elder Sapp had known Mrs. Curtis as a girl before her marriage and through long years of acquaintance came to know she was a really noble character. She possesses many rare qualities of character, which endeared her to family, friends and neighbors. She will be greatly missed by all who knew her, but most of all in her home where she lived and loved and worked.

Funeral services for Mr. and Mrs. Charles Mitchell at their home in December 1918. afternoon and husband and wife were buried in one grave at Prairie Union. Mr. Mitchell was 27 years old, and Mrs. Mitchell was 25. They were married three years last June and lived on a farm of their own northeast of Shubert. Evelyn Margaret, five weeks old, survives.

Leo and Clara Vader died of influenza only one day apart, aged 37 and 35 years old, and a double funeral was held for them at Pocahontas, IA.

It was a great shock when at 2:00 p.m. Friday, October 25, 1918, the death of Mrs. Sophia Stewart was announced. She had been ill since Saturday, but on Thursday, her recovery was deemed impossible. A specialist was called from Omaha, but nothing could be done. Pneumonia had taken too firm a hold and amid her grief-stricken family, she passed away. She was one of the happy circle of the Gehling sisters and a place is left in their hearts and home that cannot be filled. She always found time to be helpful to her friends and the needy and many homes were cheered by her presence and helped by her charitable kindness. She could always be counted upon as a friend in need, a kind and wise counselor.

John Robert Wing was born in Falls City on June 27, 1914, and died on October 22, 1918. His little brother Jack Wing was born on January 22, 1916, and died October 26, 1918. Their little cousin Garvey Franklin Thompson was born December 28, 1916, and died on October 25, 1918. All died from pneumonia following influenza. These children were members of the Cradle Roll of the Brethren Church, where they will be greatly missed. They were laid to rest at Harris Cemetery near Barada.

February 6, 1919, Louis Parsons died at Sioux City, IA, and the remains were brought back to Richardson County and funeral and burial were held. He recently held a big farm sale near Verdon, expecting to go into the automobile business, and was on his way to an automobile school in St. Paul, where he was stricken with influenza and had to leave the train at Sioux City. Mr. Parsons was thirty-three years of age. He was married ten years ago to Miss Cora Douglas of Verdon and she had one son survive; also, the parents, Mr. and Mrs. Joe Parsons, of Verdon and four brothers and one sister.

Joe Umland received news that his nephew, Elmer V. Umland, was killed in action on November 1, 1918. His only sister, Mrs. Minnie Kasey of Falls City, died of influenza and each passed away without knowing of the other’s demise.

December 26, 1918, Bryan Ahern passed away Tuesday at the home of his father, John Ahern, southeast of Shubert. He became ill about three weeks ago with a severe cold and went to his father’s home to remain while recuperating. His brother, John Ahern, Jr., was seized with influenza and from him, Bryan contracted the disease. He died in ten days. The brother John is in serious condition, and other members of the family have been sick. Bryan Ahern was a farmer aged 27 years. His wife, who was formerly Miss Fay Dewald, of Falls City and a son, two years old, survive. Charles Goolsby and Earl Fuller, young farmers not living far from Stella, also died from influenza.

W.E. Brooks, aged 33 years, died at his home east of Falls City on Thursday, October 24, 1918, from influenza. His wife and three children survive him. Two children in the Brooks family who had influenza have recovered. Mr. Brooks had a brother, David Brooks, who died of influenza.

By January the worst of the ‘flu’ was over in Nebraska. Due to the large number of fatalities in the state, only small stones and numbers mark some of the graves as gravestone makers couldn’t create larger monuments quickly enough to keep up. In some families who lost multiple members one marker was used due to lack of money.

Certain U.S. cities invoked different isolation techniques in 1918, including school, church and theater closures and social distancing. Places like New Orleans and Philadelphia ordered social distancing measures to be shortened and had worse outcomes. Philadelphia hosted a parade that saw 200,000 people. Within three days, there wasn’t an empty bed in any Philadelphia hospital. Within a week, the death toll had reached 4,500 people. The city was forced to shut down, but by then it was too late.

Whereas St. Louis and other cities chose to implement social isolation within two days of detecting active cases. The flu still spread through St. Louis, but with fewer cases and casualties than Philadelphia.

St. Louis chose to relax their ban six weeks into the epidemic resulting in a resurgence of the disease.

Since the pandemic of 1918, the world has seen three more additional epidemics, in 1957, 1968 and one as recent as 2009. These outbreaks were far less severe, with considerably lower mortality rates than the 1918 pandemic.

In 1918 influenza vaccines and antibiotics had not been developed and mechanical ventilation wasn’t available. Without these medical interventions, doctors were not left with many medical treatment options other than supportive care.

During the H1N1 pandemic of 2009, the first vaccine didn’t become available until 26 weeks after the decision to manufacture a vaccine. This resulted in most vaccinations in the U.S. occurring after the peak of the illness.

Much like today during the COVID-19 pandemic, doctors encouraged social distancing, but those measures were implemented late. Travel restrictions were impossible to implement due to the World War. The economy was impacted and following the 1918 pandemic, the United States suffered a recession, primarily due to the World War. No pandemic has had such a brutal impact as COVID-19 has had on our economy.

It’s uncertain how long we will have to live with COVID-19; it’s possible that we could see different waves of the virus much like they experienced with the 1918 “flu.”

The CDC says that masks are recommended as a barrier to help prevent respiratory droplets from traveling into the air and onto other people when the person wearing the mask coughs, sneezes, talks, or raises their voice. This is called source control. This recommendation is based on what is known about the role respiratory droplets play in the spread of the virus that causes COVID-19, paired with emerging evidence from clinical and laboratory studies showing that masks reduce the spray of droplets when worn over the nose and mouth. COVID-19 spreads mainly among people who are in close contact with one another (within about six feet), so the use of masks is particularly important in settings where people are close to each other or where social distancing isn’t followed.