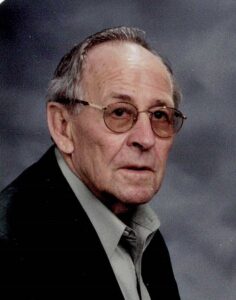 Robert was born January 26, 1927 on a farm near Stella, NE, the son of Albert and Nita (Duerfeldt) Williams. He attended the rural Bourke grade School and graduated from Stella High School in 1944. Robert was a U.S. Army veteran; in 1946 he was drafted into the Army Service Unit, driving a staff car out of the Pentagon until his discharge in 1947.

After his time in the service, he worked for area farmers and in 1948; he followed the “Wheat Harvest”. In 1950 he started farming for himself. He married Dorothy Eichstaedt June 11, 1950 in Nemaha County, NE and they lived on Dorothy’s father’s farm from 1950 to 1957. Then they moved to Waterloo, Iowa to work construction on the gas pipelines. They moved frequently, wherever there were towns being piped for natural gas. In 1964, they moved to Camanche, IA where their children attended both grade school and graduated high school. In 1977 they moved to an acreage in Clinton and lived there until 2005.

Robert was a 32nd Degree Scottish Rite and member of Camanche Blue Lodge # 60, Camanche and was a 59 year member of the Local #25.

In lieu of flowers, memorials may be made to Genesis Hospice or Park Vista.