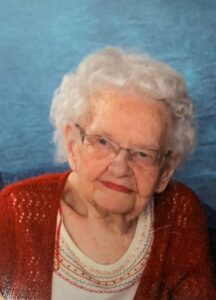 Betty graduated from Rulo High School in 1943 and married Lawrence Strecker on February 3, 1943, in Rulo. They lived on the family farm until 2008. After selling the farm, they moved to the Legacy in Lincoln. In 2013 they moved to Sunrise Country Manor in Milford, NE. Betty was a farm wife for many years, and in her later years, she worked for a grocery store, JC Penney’s and was a nurse aide for the Community Hospital all of Falls City.

A Rosary was held at 10:00 A.M., Friday, September 25, 2020, with a Mass of Christian Burial to follow at Immaculate Conception Catholic Church in Rulo, with Father David Oldman officiating.