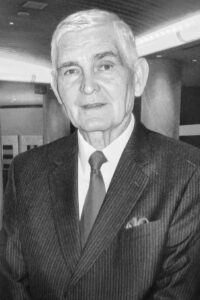 He is survived by his beloved wife of 65 years, Shirley Carmine. He is also survived by his one daughter and son-in-law, Jean Ann and Dr. Kurt Mackie, of Boerne, Texas; four grandchildren: Jonathan (Elizabeth), David (Danielle), Stephen all of Houston, Texas, and Mary Mackie Hogan (Matthew) of Waco, Texas; as well as one great-grandchild, Henry Mackie of Houston, Texas.

Eldon lived his early life in Elk Creek, Nebraska, before moving to Lincoln, Nebraska. He attended the University of Nebraska and Peru State College. Growing up, he was very active in sports, including Baseball and Basketball.

He had a career in retail sales and management, where he held various positions running retail stores in Nebraska and Iowa. In 1985, Eldon and Shirley moved to South Texas to be closer to their daughter and her family, where they resided for 30 years. During that time, he managed Jones Office Supply in McAllen, Texas. They then relocated to Boerne, Texas, in 2016.

Eldon was an avid Nebraska Cornhuskers fan and enjoyed attending Husker football games and events for more than 70 years. He also loved golfing and fishing and valued the time he spent with his grandchildren, from sporting events and dance recitals to graduations. He was also a life member of the Falls City Elks Club #963, where he spent time socializing with friends.

Eldon’s family would like to thank their family and friends for their thoughts and prayers during his lengthy battle through Alzheimer’s.

A memorial service will be held in Falls City, Nebraska, at a later date.

The family requests that any contributions or memorials be made to St. Helena’s Church at 410 N. Main St., P.O. Box 1765, Boerne, Texas 78006, or to a charity of choice. To leave condolences for the family and to view a video of Eldon’s life, visit www.ebensberger-fisher.com